Women steal the show in teaser of 'Ajeeb Daastaans' 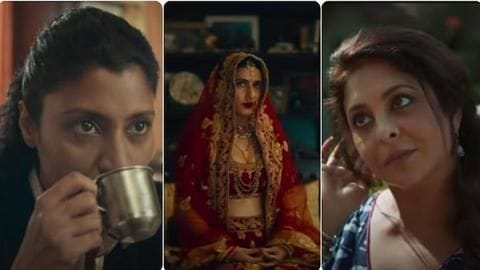 The women of Netflix's latest offering Ajeeb Daastaans are ready to impress viewers, as evident from the teaser that dropped today. As per the streamer, the anthology of four films explores "jealousy, entitlement, prejudices, and toxicity, which are often entangled within the heart of their relationships." The four stories have been directed by Shashank Khaitan, Raj Mehta, Neeraj Ghaywan, and Kayoze Irani.

In four stories, lines between right and wrong get blurred

The teaser doesn't reveal much but offers a sneak-peek into the women driving these films. The clip is gripping, to say the least, reflecting emotions of love, lust, envy, and fear. "Each story also takes you on a journey where one would struggle with the moral dilemma of what's right and what's wrong, as the lines between them get blurred," the teaser's description reads.

It boasts of a splendid star cast

It’s here... A collaborative effort, yet uniquely individual. Presenting #AjeebDaastaans with 4 exceptionally talented #DirectorsOfDharma, coming together to weave 4 individual stories that are stranger than reality itself. pic.twitter.com/GMIaJc0QPp

This isn't the first Netflix anthology Johar is associated with

Johar had earlier donned the director's hat for two Netflix anthologies. The first one was the 2018 release Lust Stories. He had directed Kiara Advani and Vicky Kaushal in a short film about sexual pleasure and premature ejaculation. He then teamed up with Netflix for the horror anthology, Ghost Stories, and directed Mrunal Thakur and Avinash Tiwary in this supernatural venture.

Netflix is all set to enchant Indian viewers in 2021

Ajeeb Daastaans piqued people's interest first when it was announced as a part of Netflix's 2021 slate of releases. Apart from this, many other movies, series, and reality shows were announced, totaling over 40 titles. Many loved series like Little Things, Jamtara, Mismatched, and others got renewed for new seasons. The streaming giant will also introduce new stand-up specials on the platform.

Vicky Kaushal-Katrina Kaif's wedding: Everything you want to know

'Decoupled': All you need to know about R Madhavan's series

'Kota Factory' Season-2 to premiere on Netflix on September 24

Industry has realized I can play central character: Shefali Shah