First trailer of Vicky Kaushal's 'Bhoot: The Haunted Ship' out 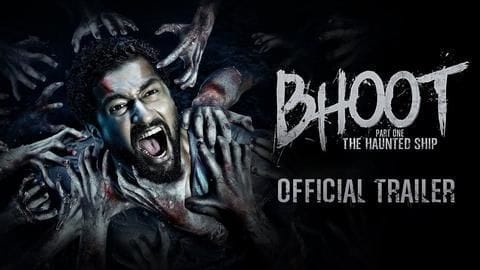 The first official trailer of Vicky Kaushal and Bhumi Pednekar-starrer horror film Bhoot: The Haunted Ship is out now. A teaser of the upcoming film was released on Friday. The film, co-produced by Karan Johar, follows the story of a young surveying officer investigating a deserted ship that has run ashore a Mumbai beach. Here are more details on this.

Details
A surveying officer unravels the mysteries of a deserted ship

The 3-minute-long trailer opens with the announcement that "Sea Bird", a dead ship has run ashore Mumbai's Juhu beach. The trailer then introduces us to Prithvi (Vicky), a surveying officer who has been assigned the task of investigating the Sea Bird. Our protagonist confronts eerie elements and spirits, both on and off the ship, as he dives deeper into the mysteries concerning the ship.

Trailer
Plenty of jump scares, none of them scary

Despite the fact that the premise of the film sounds fascinating and pretty promising for a Bollywood horror flick, the trailer of the much-talked-about movie comes off as a rather bland and boring exercise. Even as the trailer is filled with plenty of jump scares, they are just too cliche and predictable to evoke any interest or scares.

Film
'The Haunted Ship' first part in a planned franchise

A rare horror movie by Dharma and a whole-new genre for Vicky, Bhoot: The Haunted Ship has been directed by debutant director Bhanu Pratap Singh. Jointly produced by Karan Johar, Hiroo Yash Johar, Apoorva Mehta, and Shashank Khaitan, under the banners Dharma Productions and ZEE Studios, The Haunted Ship is the first part in a planned franchise. It also stars Bhumi Pednekar, Ashutosh Rana.

Release
'Bhoot: The Haunted Ship' to release on February 21

Bhoot: The Haunted Ship is set to hit the theaters on February 21. The film will clash with Hitesh Kewalya's romantic comedy film Shubh Mangal Zyada Saavdhan, starring Ayushmann Khurrana and Jitendra Kumar, which is also releasing on the same day. Bhoot may also face competition from Imtiaz Ali's much-awaited Love Aaj Kal sequel, which releases a week before, on February 14.