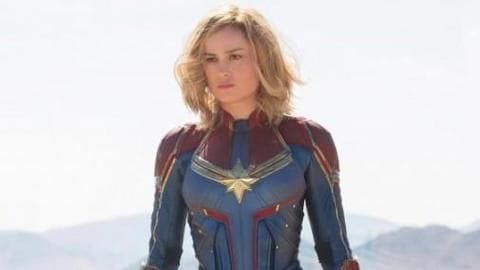 Commuting in Los Angeles is not easy, and the new Captain Marvel clip proves it. Recently released, it shows Carol Danvers or Captain Marvel in the middle of an intense fight on the top of a train. The clip introduces the upcoming Captain Marvel movie's main characters while giving fans a glimpse of her power. Read all about this new and exciting clip here.

We had earlier reported of a clip that showed Captain Marvel fight with an old lady on a train. It turned out the woman was a Skrull, an alien race that disguises itself as humans as they attempt to invade earth. While Danvers punched the woman in the face, she showed surprising agility and strength, giving our superhero a tough battle.

The new clip gives a clearer view of the fight sequence. Captain Marvel seems to be battling another Skrull on top of the train. It is either that, or the old lady has shape-shifted to a man. As the battle commences, Captain Marvel uses energy blasts to clear a portion of an upcoming tunnel. Then she blasts a hole and enters the train.

SHIELD
SHIELD monitors Captain Marvel as she fights on train

While the fight goes on, we see a glimpse of a younger Nick Fury and Phil Coulson, as they track the train. However, they seem to be keeping out of the main action, preferring to trail the superhero and see how the fight pans out. Perhaps this fight sequence will lead to the beginning of a long and fruitful partnership between Danvers and Fury.

Opinion
Setting up the Kree Skrull rivalry in the movie

The upcoming Captain Marvel movie which releases on March 8 will show Danvers as a member of the elite Kree force. She will be involved in the interracial alien war between the Krees and the Skrulls. The fight sequence on the train is just a teaser for bigger things to come. We cannot wait to see how Danvers eventually becomes Captain Marvel.