Dhinchak Pooja is back with another cringeworthy song

Dhinchak Pooja is back with another cringeworthy song
Written by Garima Bora
Jan 24, 2019, 12:25 am 3 min read 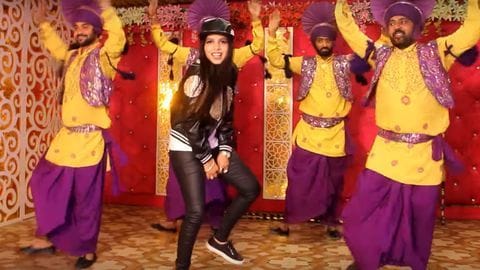 Selfie Maine Le Li Aaj - if hearing this song made your brain bleed, you are in for another nightmare as cringe pop-queen Pooja Jain a.k.a Dhinchak Pooja is back with another 'masterpiece.' And, this one is particularly dedicated to the Delhi kudis. Titled Nache Jab Kudi Dilli Di, the song was recently released on YouTube. Let's decode the video. Shall we?

The song starts with a familiar Punjabi beat you often hear at weddings and parties and you will feel probably Dhinchak Pooja is finally getting around some good music. However, that misconception soon gets quashed once you see the opening credits with the cliched shots of her overly glossy heels, necklace, and silver dress accompanied by some cheap shots of her resting face.

The rest of the video shows Dhinchak Pooja's perception of the life of a Delhi girl. Apparently Delhi girls only shop, as the performer, in the video, strolls around a mall carrying an ONLY shopping bag and is not able to figure out where her desired shop is. The video then cuts to the bhangra dancers, with whom Pooja struggles to match her steps.

Avatars
She is also an office-going woman, and apparently, a biker

Soon, other avatars of Dhinchak Pooja follow, along with the lyrics, "Paanipuri bhi khaati hai, duniya bhi chalati hai, Jahaan par bhi jaati hai, aag lagati hai. (She eats paanipuri, she controls the world, she spreads fire wherever she goes)." This is followed by stills of her acting as an office-woman and awkwardly modeling with a Royal Enfield. God knows why!

After watching the exhausting video, we are not sure how Delhi girls must be feeling. The only good thing about the video were the professional bhangra dancers in the background with whom Dhinchak Pooja failed miserably to strike a chord. On the other hand, the video has already received over 70,000 views but without a single like. Interestingly, the comments section is disabled. Obviously!

Cringe-pop sensation
Love her or hate her, you just can't ignore her

However, the joke's on us as we gave her the wings to reach the massive popularity she now enjoys. Love her or hate her, but you can't stop forwarding her songs without a hearty laugh. In fact, her meaningless songs has become such a sensation that her fake musical event on Facebook in 2017 had over 2,000 people ready to attend it.

Information
Songs removed after someone complained to YouTube about it

However, the artiste's career had received a setback when all her songs were taken down from YouTube due to copyright claims by one 'Kathappa Singh'. Nevertheless, the always out-of-tune singer managed to enter Bigg Boss 11 only to get eliminated in less than a month.