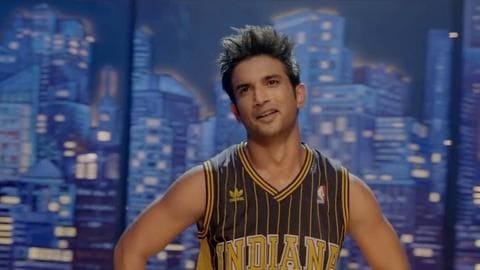 The last song that Sushant Singh Rajput shot for, Dil Bechara, from the eponymous upcoming movie, is now out! The great deal of charm and ease with which the late actor performs in the title track is a bittersweet experience, as it brings you the realization that there won't be much more of his talent to witness in the time to come. Here's more.

Song
It has been composed and sung by AR Rahman

The song has been composed and crooned by the maestro, AR Rahman. The track, set in a college auditorium, sees Sushant's flamboyant character, Manny, putting up a cool dance performance. The lyrics, penned by Amitabh Bhattacharya, talks about how the college star has gotten "friend-zoned" by a shy and introverted girl Kizie (played by debutante Sanjana Sanghi), whom he dearly loves.

Details
Sushant's charm and talent is evident throughout the song

The highly-anticipated title track shows Sushant, the ever charmer, and an effortless dancer, performing difficult steps with unbelievable ease. The song is bound to fill up your heart with a mix of emotions. The track, with Rahman's soothing voice and Bhattacharya's supremely catchy lyrics, will stay with you long after you finish watching the video.

Fact
The song was filmed in a single shot

What's even more impressive is the fact that the entire song was filmed in one single shot. Director Mukesh Chhabra revealed that Sushant rehearsed with choreographer Farah Khan for a day and then filmed the song in one shot. "The song picturization is deceptively simple and Sushant who was a very good dancer, made it look effortless," the director said.

Interestingly, as a reward for performing so well, Sushant demanded home-cooked food from Farah, and she obliged. "As a reward for nailing it perfectly, all Sushant wanted was food from my house which I duly got for him," she said. She added that the song is pretty special for her, saying, "All I can see is how alive, how happy he looks in it."

Film
'Dil Bechara' will be out on July 24

Dil Bechara, which remains Sushant's final film, will be out on Disney+ Hotstar on July 24. Based on John Green's popular novel The Fault in Our Stars, it tells the story of two youngsters: Kizie, a girl suffering from cancer and Manny, a boy whom she meets at a support group. It also stars Saif Ali Khan and Jaaved Jaaferi.