'Eternals' teaser: Jolie remains mum throughout, her expressions entice you 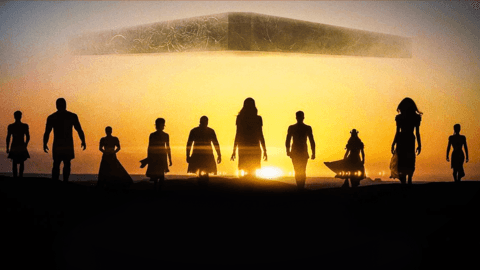 Marvel's Eternals teaser, dropped recently, rely on visuals more than dialogues. The End of the World by Skeeter Davis is a perfect welcome tune to the teaser, and it plays till we hear Gemma Chan's character speak to Richard Madden's Ikaris. The clip also mimics MCU's post-credit scene streak, when we see Ikaris talk of leading the Avengers, with his team bursting in laughter.

In this article
Aesthetic

Zhao's filmmaking aesthetics get reflected in the moody shots

The teaser starts by showing us a huge spaceship that's approaching the Earth, with two of the Eternals, Sersi (Chan) and Ikaris, looking down at the ground. The aesthetics, a signature mark of Chloe Zhao, who is at the helm, cannot be missed, as we see moody and intimate shots, paired with somber music. It has everything the Academy award-winning director is known for.

The trailer moves on to reveal Angelina Jolie's character Thena, who is practicing her weaponry drill, beautifully choreographed. Her gorgeous costume, with the design of cosmic energy flaring all over, surprises your senses. A golden headband completes her royal look. As per the plot, Jolie's character will serve as a diplomat of sorts, helping the Eternals find common ground across civilizations and cultures.

Salma Hayek's Ajak gets to do the maximum talking in the teaser, but we see only a glimpse of her character, who's believed to be the Eternals' spiritual leader. Fun fact: In the comics, Ajak is portrayed by a man! Phastos (Brian Tyree Henry), the scientist/inventor of the Eternals gang, also makes a quick appearance, trying to manipulate the cosmic energy flares.

Apart from the characters, we also get a blink-and-you-miss-it Bollywood style moment in the teaser. An Indian wedding, complete with a desi dance sequence, can be seen. Kumail Nanjiani's Kingo is seen vibing with the choreography, as he poses as a Bollywood star on Earth. We also could spot Indian actor Harish Patel, who's playing a small role in the superhero film.

The superhero flick is set after 'Avengers: Endgame' events

The teaser makes it clear that Eternals is set after Endgame. Apart from the aforementioned characters, it also shows Kit Harington in a flash. The Game of Thrones alum plays a human warrior named Dane Whitman, who wields a mystical sword. A part of Phase Four of the MCU, the flick is currently scheduled to be released on November 5 this year.

Observation: Marvel championing causes of diversity and inclusion with 'Eternals'

Diversity and inclusion seem key for the famed studio, and they are truly setting a great example with Eternals. It will feature their first openly gay character, Phastos, played by Henry. The movie will also have Lauren Ridloff as Makkari, who will be MCU's first deaf superhero. The actress, who is deaf in real-life, said she is "thrilled" to represent her community.

A new poster for 'Eternals' has also been revealed

In addition to the first teaser, Marvel also revealed a brand new poster for Eternals. It gives fans a glimpse at the new superhero team, well actually their silhouettes, as they walk toward the rising sun. We also see the spaceship, featured at the beginning of the teaser, floating above them, with the ensemble cast members' names written over a starry night.

Check out the ethereal looking poster for the film

Chan's Sersi will be leading the ensemble? Feige nods

Chan's Sersi is reportedly leading the Eternals team, and the 2-minute teaser makes it apparent. In fact, MCU chief Kevin Feige had also told Variety last month that, "If there was a lead in this ensemble, it is Sersi, it is Chan." In the comics, Sersi is the one who interacts with humanity the most, and falls in love with the earth upon landing.