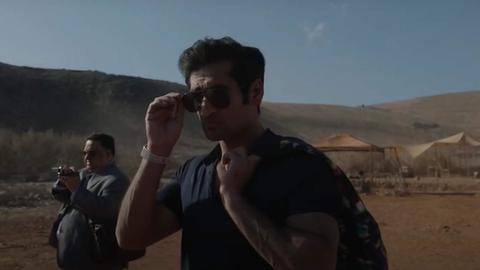 Marvel Studios finally announced the release dates of its upcoming slate of Phase 4 movies recently. The announcement came with an emotional clip featuring our favorite moments from past MCU films and new ones like Eternals and Black Widow. A scene from The Eternals has now grabbed the attention of many Indian Marvel fans, and they have questions to ask! Let's find out.

Netizens think it is Ibu Hatela walking alongside Kumail Nanjiani

As we got our first look at the upcoming star-studded Chloe Zhao-directorial, eagled-eyed Bollywood fans were glued to a particular scene. Toward the end of the video (precisely at 2 minutes and 31 seconds), Kumail Nanjiani is in focus. But behind him, many spotted a familiar face. They feel that the man with a potbelly resembles Harish Patel, aka Ibu Hatela.

The character is a popular meme material for 'desi' fans

For the unversed, Ibu Hatela was one of the iconic characters from the cringe-fest that was Gunda. The 1998 Mithun Chakraborty-starrer is widely known for being a gold mine for memes than for the film. To recall, the whole gang of villains was immaturely funny. Here is Hatela's famous dialogue, "Ma meri chudail ki beti, baap mera shaitan ka chela." Laugh, thank us later!

However, the actor's IMDb page does not support the claims

Social media users congratulated the actor for debuting in Hollywood and remembered Gunda once again. One user called his journey "from the Gunda universe to Marvel" as "epic." Another declared Hatela's introduction as the favorite scene from the clip. However, Patel's IMDb page does not list The Eternals under hisworks. He has also appeared in major Bollywood films like Andaz Apna Apna and Mela.

Apart from The Eternals, Marvel's latest clip gave us a special look at Black Widow and Shang-Chi and the Legend of the Ten Rings, which are closest to their premiere dates. Release dates were also revealed for the sequels of Spider-Man, Doctor Strange, Black Panther, Ant-Man and the Wasp, Thor, and Guardians of the Galaxy. We will also be getting The Marvels next year.