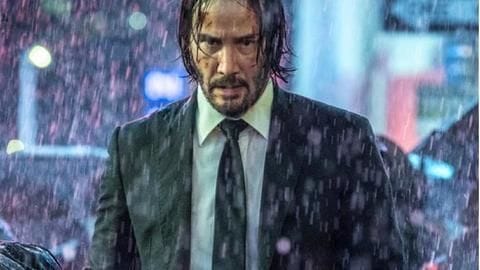 John Wick: Chapter 3 - Parabellum is the third installment to the popular action franchise, which stars Keanu Reeves as the lethal assassin, John Wick. The trailer, which was recently released, picked up the story from where part two had left off and promises more action, higher risks and a deadlier Wick than we have ever seen. Here, we decode the new trailer.

The third film will see Wick on the run, after breaking the rules of the assassins, by killing someone on the Continental Hotel's grounds. The hotel is considered to be neutral grounds, preventing killings. Due to this transgression, Wick was declared 'Excommunicado' and a $14 million bounty was placed on his head. The trailer shows Wick trying to escape New York without getting killed.

Unsurprisingly, the pure action movie includes sequences that left us wide-eyed. They show Wick preparing for war, in an attempt to gain peace from the assassins chasing him. Among the most notable were katana wielding ninjas who attack Wick on bikes. Another scene where Wick rides a black horse through New York while fighting assailants stood out for its sheer style and coolness quotient.

Information
Why is the movie titled 'Parabellum'?

For those unaware, the movie's title Parabellum comes from the Latin phrase, 'Si vis pacem, para bellum' translating to 'If you want peace, prepare for war'. This falls in line with Wick's promise at the end of the second film, that he would kill all the assassins who came after him. Interestingly, the 9mm Parabellum is also the most popular type of bullet, globally.

We’ll be seeing you…John Wick: Chapter 3 – Parabellum is in theaters May 17. #JohnWick3 pic.twitter.com/5JV41DW7wZ

Other cast
Friends turn to foes, and a new ally arises

Laurence Fishburne and Ian McShane return as Bowery King and Winston, Continental Hotel owner. While they were earlier Wick's friends, they are now his foes for breaking rules. Amid enemies, Sofia, played by Halle Berry, emerges. She is a deadly assassin who shares a past with Wick. We do not know her role yet, but will, when the movie releases on May 17, 2019.