'Manmarziyaan' trailer: Anurag Kashyap brings his uniqueness to a love-triangle 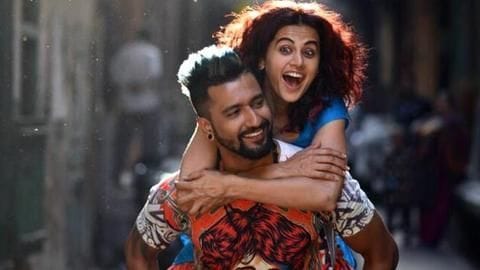 The much-awaited trailer for 'Manmarziyaan', directed by Anurag Kashyap, released today. The film stars Abhishek Bachchan, Vicky Kaushal, and Taapsee Pannu as the protagonists. A love story set in Punjab, the tagline of the movie is: Love isn't complicated, people are. Scheduled to release on September 14, the film is a beautiful mixture of Anurag's and Aanand L. Rai's worlds, according to Taapsee.

According to the trailer, Kaushal plays Vicky, a roadside Romeo- expressive but irresponsible. Taapsee plays Rumi, a fierce Punjabi girl madly in love with Vicky. However, put off by his irresponsibility, she marries Robbie, the mature Punjabi gentleman played by Abhishek. Still haunted by Vicky, Rumi is torn between the affections of these two men. Who will her heart choose? Only the film holds the answer.

The trailer shows a master director at work, and the cast looks stellar. Kaushal's expressive eyes as a lover and his portrayal of a quirky Punjabi boy was brilliant. Taapsee showed her sass and skill in the trailer with her dialogues. However, the biggest revelation was Abhishek, who despite having been away from the screen for two years looked pretty comfortable in his character.

So will be releasing the #Manmarziyaan trailer here in about an hour…… Fully panicking!!! 😰

Unique storytelling
Anurag Kashyap: The man with the magic wand

Anurag had always been a highly individualistic director who had critical successes like 'Gangs of Wasseypur', 'Raman Raghav 2.0'. He brings a unique flavor into his films. The other love story we saw him try was 'Dev. D', a retelling of Devdas. Seeing the success of his former venture into this genre, we have great expectations from 'Manmarziyaan'.

What a super trailer!!!! And is promising to be a supremely edgy fun and intense ride!!!! The three actors are on top of their game!!!! And Anurag has nailed it! @juniorbachchan @vickykaushal09 @tapseepannu @anuragkashyap72 !! You guys rock!!!!❤️❤️❤️❤️ https://t.co/nNnGaumgMQ