Michelle Obama documentary 'Becoming' to release on Netflix this May 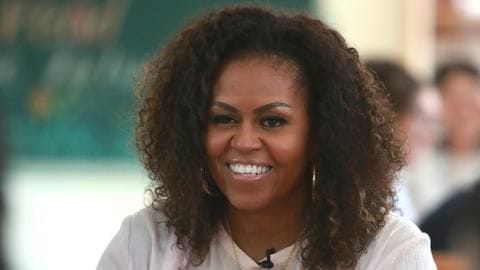 Netflix has announced its latest collaboration with the Obamas: Becoming, a documentary film that chronicles former US First Lady Michelle Obama's journey during her blockbuster book tour. Obama went on a 34-city tour during 2018-2019 to promote her bestselling memoir by the same name. The documentary is set to arrive on the streaming platform on May 6. Here's more on this.

Film
The documentary has been directed by Nadia Hallgren

Obama's book tour received an overwhelming response. Becoming, the memoir, has sold more than 11 million copies and been translated into 20 languages. Meanwhile, the movie has been directed by Nadia Hallgren, a veteran documentary cinematographer who makes her feature directorial debut with Becoming. Hallgren trailed Obama throughout the tour from city to city.

Book
What is Obama's book all about?

In Becoming, Obama talks about her origins, her time in White House, her public health campaign and her relationship with her husband, former US President Barack Obama. The book, published by Crown in 2018, was an instant hit. In fact, it sold more than 725,000 copies on its first day. This year, Obama also won a Grammy award for an audiobook rendition of Becoming.

Statement
In a statement, Obama shared her book tour experience

Talking about the tour, Obama said in a statement, "Those months I spent traveling— meeting and connecting with people in cities across the globe—drove home the idea that what we share in common is deep and real and can't be messed with." "We processed the past and imagined a better future...many of us dared to say our hopes out loud," she added.

Quote
I treasure that connection now more than ever: Obama

"I treasure the memories and that sense of connection now more than ever, as we struggle together to weather this pandemic, as we care for our loved ones, tend to our communities... while coping with huge amounts of loss, confusion, and uncertainty," Obama said.

Production
'Becoming' is the latest release from Higher Ground Productions

Here is a moment from Becoming, Nadia Hallgren’s new documentary about @MichelleObama, releasing globally on May 6 pic.twitter.com/bxxLWaQurD