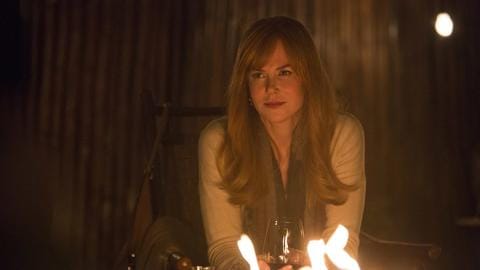 You want to get well? Surrender yourself to Masha! Hulu released the trailer of its new dark-comedy miniseries, Nine Perfect Strangers. Based on Big Little Lies author Liane Moriarty's book, the soon-to-release show presents the perplexed lives of nine people. They get locked together at a wellness resort, and that's when they face their inner demons. And, Masha holds the thread to their minds.

Trailer
Nine strangers with nine demons, welcomed at one house

The teaser trailer opens with Nicole Kidman's character Masha welcoming the inmates at her Tranquillum House. Masha has chosen nine strangers with nine different evil sides that complement each other. The strangers have come to this resort, far from their hectic suburban lives, to heal from their suffering. Each one hides some kind of damage within, which will get revealed by each passing episode.

Storyline
Masha keeps an eye on all through hidden cameras

"Wellness retreat is such an utter crap," says one to another. Despite being resistant to Tranquillum House's rules, the nine manage to stay together. The 2.42-minute-long clip shows each of them digging their own grave, as a part of meditation, while thinking of their horrific past. Masha keeps an eye on them through the cameras set at every part of the resort.

Wonder
Will everyone be healed or killed when the retreat ends?

The strange host emphasizes, "There's nothing to fear," only that there is. The strangers face their fears and start doing things like jumping from a height, kissing the same gender, screaming, etc. We then see Masha about to do a ceremony on the last day, and after a while the police arrives at the resort. Will someone die or is it something worse?

Premiere
First three episodes of the thriller release on August 18

Is Masha nurturing a cult? That's what the trailer is pointing at. The strange laugh of Melissa McCarthy's character will make you believe that Masha has hypnotized everyone. And, that kind of devotion could even lead to murder. Hulu's miniseries is created by David E Kelley and John Henry Butterworth. The first three episodes of Nine Perfect Strangers will release on August 18, 2021.