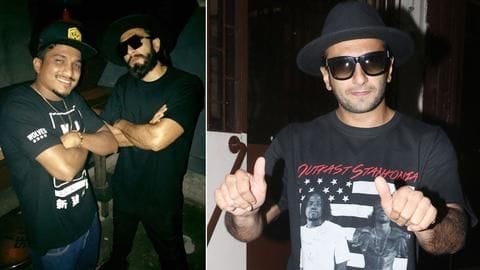 Is there anything Ranveer Singh can't do? That was the first thought that came to our minds after watching the teaser of his upcoming release Gully Boy. He swept us off our feet as he rapped a song in the teaser. Ranveer not only impressed us with his performance but also won praises from rapper Divine who feels that the actor looked extremely real.

The teaser
Ranveer introduces the nation to 'asli hip-hop'

Gully Boy is a movie that revolves around hip-hop culture, with Ranveer being the 'voice of the streets'. The actor looked convincing as he expressed his angst through rap and said his voice can't be silenced. He seemed adamant to introduce the nation to asli hip-hop. It was refreshing to see Ranveer in this rather humble and grounded role.

Reactions
Rapper Divine is all praises for Ranveer

Gully Boy is based on the lives of well-known street rappers Vivian Fernandes aka Divine and Naved Shaikh aka Naezy. So did rapper Divine train Ranveer for the role? Divine replied that he can't take credit for Ranveer's performance. But, he was all praises for Ranveer and said the actor gave his all for the role in Gully Boy.

Divine is quite excited about Gully Boy and hopes that Ranveer's powerful performance will bring attention towards hip-hop culture in India. He mentioned that Ranveer was the perfect choice for the movie. "The rapping scene started in Mumbai, and a film like this will enlighten those who aren't aware of the movement. That, in turn, will take the movement forward," he added.

Feat
'Gully Boy' to be screened at Berlin Film Festival

Helmed by Zoya Akhtar, Gully Boy will be screened at the prestigious 69th Berlin Film Festival next month. The coveted event shows documentaries and movies having extraordinary stories. Elated with the achievement, Divine said that Zoya's efforts were paying dividends. Also starring Alia Bhatt and Kalki Koechlin in key roles, Gully Boy will hit the screens on February 14.