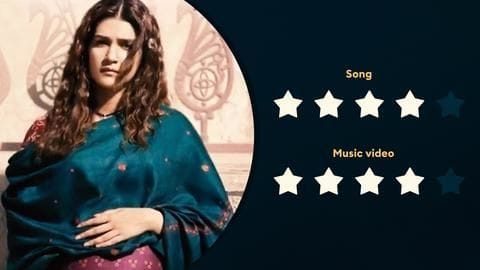 Makers of Mimi recently dropped a song, Rihaayi De. Crooned and composed by AR Rahman, it brings the magic of the music maestro on screen. The music video features Kriti Sanon in an emotional state of mind, while Pankaj Tripathi tries his best to keep her happy and comfortable. You can listen to this track on Spotify, JioSaavn, Wynk Music, etc. Here's our review.

About
Pregnant 'Mimi' seeks freedom in this song from the chaos

The video begins with Sanon aka Mimi in her baby shower ceremony, where everyone is seen celebrating. But, she is not happy. Sanon is heartbroken and breaks down several times in the video. Through the song, she seeks freedom from all the chaos going around her. Taking reference from the trailer, this track might appear when Sanon will be asked to abort the baby.

Response
Hats off! Lyricist and the singer deserve an applause

How can a song go wrong when Rahman is the singer and Amitabh Bhattacharya is the lyricist? The chorus line —"Kaun samjhe dard tere, kaun tujhko rihaayi de?" (Who will understand your pain? Who will offer you freedom?) — hits the right spot and makes you feel the pain. Not many music composers can bring life to lyrics, but Rahman has done it, again.

Verdict
Song stays with you for long, gets 4 stars

The feeling of being trapped, even when everyone around you is happy, is something one must have been through, at least once in life. Rihaayi De is exactly about that, and it has been delivered beautifully in the video. The melodious tracks has all the elements - emotions, lyrics, and voice. That's why it's a perfect offering. Verdict: 4 stars each (song and MV).

Information
'Mimi' is a highly anticipated movie of this month

Before this, the makers released an upbeat track, Param Sundari, which featured Sanon showing her dance moves. Sung by Shreya Ghoshal and composed by Rahman, the song was well received by the Luka Chuppi actress' fans. Ever since the trailer was released, Mimi is being eagerly awaited. Directed by Laxman Utekar, it premieres on July 30 on Netflix and JioCinema.