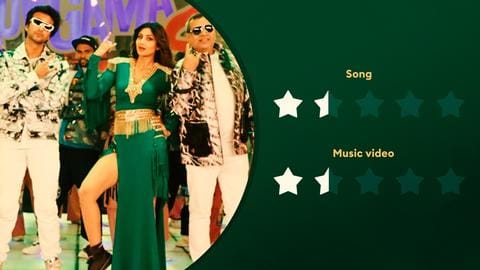 Earlier, Ratan Jain, the producer of Shilpa Shetty-starrer Hungama 2 had confirmed that her husband Raj Kundra's recent arrest won't affect the film and its promotions in any way. And, accordingly, makers have released the title track for the comedy today. The upbeat dance number, Hungama Ho Gaya however fails to create any stir, be it the tune or production design. Here's our review.

Upon hearing the words, Hungama Ho Gaya, everyone is bound to recall the iconic song by Asha Bhosle from Anhonee. Naturally, people would expect something as catchy and groovy from the new song. But the nearly four-minute-long track, voiced by Mika Singh and Anmol Malik, is disappointing. Anu Malik's music feels lost and Sameer's lyrics do not hit the mark, at all.

Branded supposedly as a post-credit song, the video is set in a club where all the lead cast members, namely Shetty, Paresh Rawal, Meezaan Jafri, and Pranitha Subhash feature. The theme is cabaret-inspired and Shetty deserves a special mention for dazzling with whatever she has been given. But then again, the finished product doesn't appear polished. Ganesh Acharya has choreographed the dance sequence.

Verdict
Priyadarshan's script now really has to pull its weight

Rawal, who is the only main cast member returning to the sequel, doesn't do much dancing, but attracts eyeballs with his heavy glass-donning antics. Overall, Hungama Ho Gaya's poor performance increases pressure on director Priyadarshan's script, as the movie won't be getting much help from its songs (including Chura Ke Dil Mera 2.0). Verdict: Song and video both get 1.5/5.

Information
The movie will see digital release on July 23

The movie marks the return of both the director and lead actress to Bollywood. While Priyadarshan is returning after a hiatus of eight years, Shetty is making a comeback after a break of over 13 years. Hungama 2 will also feature Ashutosh Rana, Manoj Joshi, Rajpal Yadav, Johnny Lever, and Tiku Talsania in pivotal roles. It'll be released on Disney+ Hotstar on July 23.