Home / News / Entertainment News / 'Chura Ke Dil Mera 2.0': Why did you do this?
Entertainment 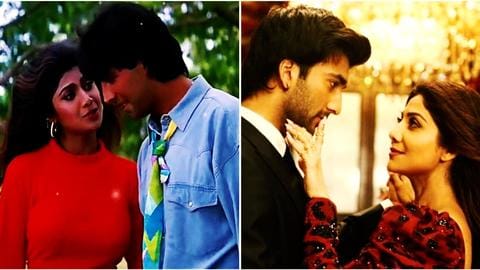 Shilpa Shetty Kundra tries to recreate her magic in Chura Ke Dil Mera 2.0, alongside Meezaan Jafri in the new song video of Hungama 2. Originally, the track, which was sung by Alka Yagnik and Kumar Sanu, featured the actress and Akshay Kumar in the 1994 movie, Main Khiladi Tu Anari. But this new version made me say just one thing- RIP original!

Both have been composed by Anu Malik and still, the 2.0 track has ruined the original. How can the same composer do it? Chura Ke Dil Mera 2.0 is sung by Benny Dayal, Anmol Malik, who add their essence, but couldn't pull the right strings. It has no element to make you groove, except the dance moves, which looked like a Zumba class.

Comparison
Remember Kumar and Kundra's sensuous chemistry in the original?

When you listen/watch Chura Ke Dil Mera Goriya Chali, the chemistry between Kumar and Kundra feels real. Although they too had weird dance sequences, they at least matched their energy with the beats. The 2.0 version has none of the above. Instead, Kundra looked awkward performing those exercise steps. And it's better not to talk about chemistry. Bollywood, please, just stop remaking classic songs!

Here it is, OLD wine in a NEW Bottle 💃
Missed the OG @akshaykumar, but #Filhaal, it’s time to steal @MeezaanJ’s heart 😉❤️#ChuraKeDilMera 2.0 song is out now!
An ode from all of us to late #SarojKhan ji...https://t.co/4TRH1uWAgJ#Hungama2@DisneyplusHSVIP #Venus pic.twitter.com/YQCC8TIfJr

Positive
'2.0' is the first song of the movie that released

The new song video also lacked the background that made the original more appealing. The 2.0 song is filmed inside a crowded banquet hall, with a bunch of background dancers. However, one thing that remained intact was Kundra's beauty, who has aged gracefully over the years. And the hook step does make you a bit nostalgic. It's the movie's first song to be released.

Verdict
The song disappoints, gets 2 stars; MV gets 2.5

The makers recently released Hungama 2 trailer, which was launched by Kumar on his Twitter handle. Like the song, the trailer didn't live up to the fans' expectations. However, it did promise to be entertaining. Its song Chura Ke Dil Mera 2.0, however, disappoints. The Priyadarshan-directorial is set to release on July 23 on Disney+ Hotstar. Verdict: Song (2 stars), Music Video (2.5 stars).