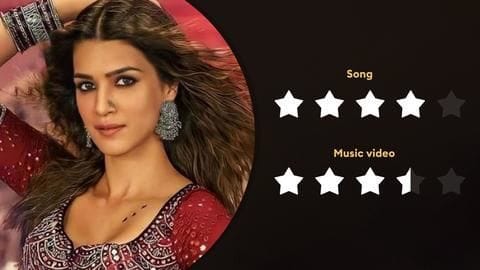 The first song from Kriti Sanon's upcoming film Mimi is now out! Titled Param Sundari, the upbeat track sung by Shreya Ghoshal features Mimi in her raw flavor as she aces thumkas and talks about her aspirations. Composed by AR Rahman, it serves as an entertaining introduction to the lead character. Mimi premieres on Netflix and Jio Cinema on July 30. Here's our review.

Song
'Bikaneri Chhokri' is the newest heartbreaker in town!

The screen opens to an address to the Bikaneri Chhokri, who is branded a "heartbreaker" by all Romeos. Ghoshal's striking voice mixed with the folk-inspired beats hit the right tune while lyrics by Amitabh Bhattacharya offer the perfect mixture of rustic and trendy. Then, we reach the pinnacle of the dance track with the chorus. Overall, it is a welcome surprise from Rahman.

Raking in over 1.7 crore views so far, the music video of Param Sundari is currently trending on YouTube under the Music category. Yet, the video clip does not provide a fresh take. Sure, we don't get objectifying shots of the actress but we have seen far too many similar songs picturized in Bollywood films. Choreography by Ganesh Acharya is unique and enjoyable.

Verdict
Second half elevates the song to new heights

What works for Param Sundari most favorably is the second half. Here, it shows us that it's not just another "item dance number," as Sanon (Mimi) tells us she will not be held down by constrictions of society and how she wishes to take high flights. And of course, Sanon is a delight to watch. Verdict: Song gets 4/5, while music video receives 3.5/5.

As seen in the trailer, Mimi agrees to become a surrogate mother for an affluent couple to earn quick money but then the story takes an unexpected turn. Presumably, Param Sundari gives us an insight into what Mimi's life looked like before this event. Apart from Sanon, the Laxman Utekar-directorial will also star Pankaj Tripathi and Sai Tamhankar in pivotal roles.