After a long wait, Salman Khan finally released the first poster of his Eid release, Bharat. In it, the actor is seen pensively looking at a direction, while sporting the salt and pepper look, and wearing square framed glasses. The wrinkles on his forehead signify his life-experiences. The poster, set in 2010, also has glimpses of Jackie Shroff, who plays father to Salman's character.

Salman shares the first poster with a beautiful caption

Poster look is significant, different from what was teased 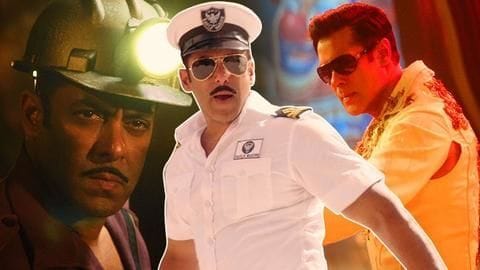 Bharat is set from 1960s to the present times. The look in the poster is significant, as it's pretty different from what was shown in the teaser. The teaser had Salman playing a daredevil stunt artiste of a popular circus group in 1960s, and Disha Patani is a trapeze artiste. Bharat also stars Katrina Kaif, whose soft curls and saree look created ripples earlier.

'Bharat' remake of South Korean film, shoot has wrapped up

Apart from the poster, Salman is also slated to release the much-awaited trailer of Bharat this month. A remake of South Korean film, An Ode to my Father, Bharat has been helmed by Ali Abbas Zafar and shot in various places like Malta, Punjab, Delhi and Mumbai. The shoot has wrapped up, which Katrina informed after sharing a photo of her with Salman.

'It's the journey of a country and also a person'

Co-producer Atul Agnihotri, while talking of Bharat, had said, "It's the journey of a country and also a person, both of whom go by the name of Bharat." "That film is just the starting point for ours but since it was an inspiration, we wanted in all fairness to officially own it and acquired the remake rights before going ahead with Bharat," he added.

Trailer of 'Bharat' is expected on April 24

Apart from Salman, Katrina, Disha and Jackie, Bharat also has Tabu, Sunil Grover and Nora Fatehi in key roles. The trailer, expected on April 24, will probably show the partition journey of Salman, and his parents, played by Jackie and Sonali Kulkarni, in more detail than what was already teased earlier. The film will hit theaters on Eid, that is, June 5, 2019.