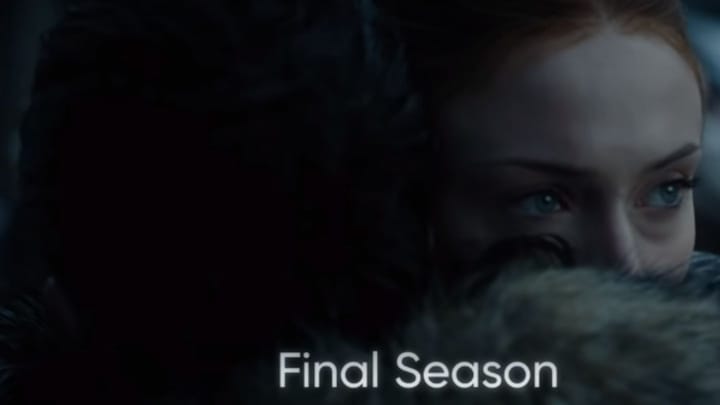 HBO released a teaser for its upcoming shows. Among the clips was the highly anticipated 'Game Of Thrones' teaser. The final season of the show has already been delayed and will now air around May 2019. However, the sneak peek has already gotten fans excited as one scene stands out. Sansa and Jon share a hug but her eyes tell a different story. Read to know it means.

Blink and you miss

Viewers must be careful while checking out the clip. Not only is the hugging moment incredibly short, but it is also likely to be confused with Jon and Sansa's reunion at Castle Black. However, upon careful inspection, it can be seen that it is Winterfell.

A touch of evil

One of the most popular fan theories is Sansa Stark would betray Jon Snow in Season 8. Actress Sophie Turner, who plays Sansa, said in an interview that the final season has war, danger, and betrayal. It would also be in sync with the theme of GoT where people do anything for power. In Jon's absence, the Lady of Winterfell might want to be Queen in the North!

Does Bran confirm this theory?

Brandon Stark is the three-eyed-raven who can see the future. The all-seeing Stark might substantiate this fan theory. When Bran came to Winterfell, he hugged younger sister, Arya enthusiastically. However, he was distant and neutral with Sansa. He might know of something bad she does in the future but is unable to prevent it. Is Sansa's betrayal, the evil thing? Only time will tell.

Is Sansa looking at the mother of dragons?

Notably, Daenerys Targaryen and Jon grew close by the end of Season 7 and it is likely she will accompany him to Winterfell to convince the North to join her. It is possible that Daenerys is standing right there as Jon is hugging Sansa. If viewers notice the scene slowly, they can see Sansa looking elsewhere. The Direwolf might be sizing up the Dragon.

Too gross for comfort

An even stranger fan theory is Sansa-Jon romance. Sibling romance is nothing new for GoT, remember Jaime and Cersei? However, if that is the case, then Daenerys' presence at Winterfell might complicate matters. Notably, in George RR Martin's story outline, Arya falls in love with Jon. Sansa might just take her place in the show. Was it jealousy then, in Sansa's eyes?