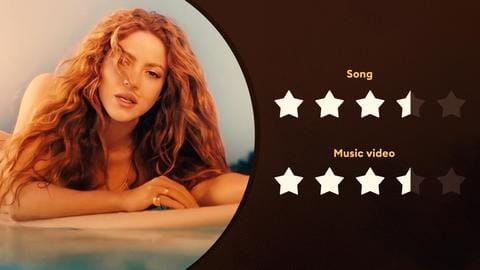 Colombian pop star Shakira has finally ended her solo song drought with Don't Wait Up! The house track is the Waka Waka singer's first single since 2017's El Dorado and the first English-language solo song since 2016's Try Everything. Written by Ian Kirkpatrick and Emily Warren, the new song talks of taking one night off to "do something for myself." Here's our review.

The EDM track begins softly with lyrics that complain about a relationship that has lost its spark. The 44-year-old then shares her resolve, which is to let go of her worries momentarily and enjoy herself. The repetitive chorus, "Don't wait up," rings in your ears like a mantra, as if asking you to dance this night away as if it's your last, too.

Video
Shakira dazzles, but mostly on the ocean

A considerable amount of the video clip is Shak surfing on the night ocean in neon-lit surfboards, which is a visual pleasure. She had actually shot it between 2:00-5:00 am in the water and her hard work surely pays off. In fact, dance sequences fall flat in front of the magnificent magenta waves. Filmed in Tenerife, Spain, the entire song isn't super memorable though.

Verdict
Dance from the dancing machine herself disappoints; overall rating 3.5/5

Maybe the Whenever, Wherever star is going for a more steady pace for her upcoming works but the dance in Don't Wait Up is not at par with the Shakira we all know and love. Overall, the song is catchy, worthy to make you groove and forget about it all that holds you down. So go all out! Verdict: song and video both get 3.5/5.

Information
Shakira sold her back catalog in January this year

The Grammy award winner had made headlines earlier this year for selling her back catalog consisting of 145 songs to Hipgnosis Songs Fund, an investment firm listed in London. The deal was made for an undisclosed sale value and no other details were revealed. While she hadn't released solo music for long, Shakira released several collaborations like Me Gusta and Girl Like Me.