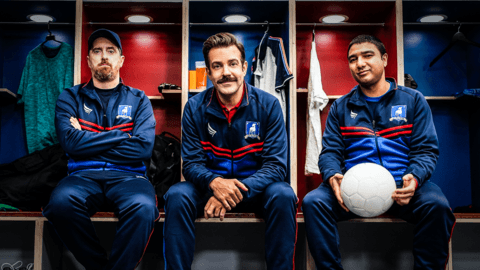 Apple's first event of 2021 not only witnessed the the reveal of new tech products but also a new trailer for the comedy series Ted Lasso. The Golden Globes winner starring Jason Sudeikis as a funny football coach will be returning with a 12-episode season two on July 23 this year. The charming series has been one of the few breakout hits for Apple.

The release date was also announced via the official accounts of the show. The production of the new season began in London in January this year. The new edition will continue to showcase Lasso's journey in trying to lead his team AFC Richmond after a rather bad season that ended with the club being moved to a lower league.

‘Cause guess what, Greyhounds? Our 2nd season starts 7/23! Can I get a Bah Amen!? That’s what I used to think they were called

Pandering
'Ted Lasso' will not include the pandemic in its script

Sudeikis is actually one of the co-creators of the show alongside veterans Bill Lawrence (Scrubs), Joe Kelly, and Brendan Hunt (Horrible Bosses 2). Lawrence has previously stated that Ted Lasso will not be pandering to the ongoing COVID-19 pandemic. "People are going to want escapist entertainment. Half-empty stadiums with Zoom crowds? It's too weird to even be writing (sic)," Lawrence told The Hollywood Reporter.

Review
The series has been a hit worldwide

Ted Lasso has been well received by fans and critics with many calling it fun, breezy and full of heart. The sports-comedy series has a high 91% rating on Rotten Tomatoes and an 8.7/10 on IMDb. "After a cruel 2020, the humane ideas behind Apple TV+'s defiantly good-hearted Jason Sudeikis comedy actually feel kind of important," a part of Vanity Fair review said.

Sudeikis is a man of many talents - an actor, comedian, writer, and producer. He was hired as a writer back in 2003 for Saturday Night Live and he soon became a cast member of the show until 2013 during which he was part of many epic comedy sketches. Some of his famous films include Horrible Bosses, Hall Pass, and We're the Millers.