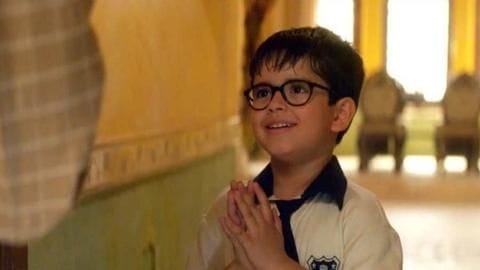 By the looks of its title as well as the cast, Chintu Ka Birthday appears to be a light-hearted Indian family drama set in a small town. This is true to some extent. The only catch is that technically, it's nowhere close to India. The movie showcases an Indian family's struggle while being stranded in war-torn Iraq. Here's more on this.

Film
The film has been produced by the AIB team

Chintu Ka Birthday has been produced by comedians Tanmay Bhat, Rohan Joshi, Ashish Shakya, and Gursimran Khamba under the banner First Draft Entertainment. It has been written by Satyanshu and Devanshu Singh and also marks their debut directorial feature. The movie stars Vedant Chibber as six-year-old Chintu, Vinay Pathak as Chintu's father, Tillotama Shome as his mother, and Seema Pahwa as the grandmother.

Trailer
What is the trailer all about?

Initially, the trailer tells the story of an average Indian household, where a child is excited for his birthday, while the rest of the family wants to make it a memorable one for him. It's only after a minute passes that you realize the movie is actually set in wartime Iraq, as two armed US soldiers barge into the house, suspecting they are insurgents.

Information
US troops invaded Iraq in 2003

The film is set in 2004, a time that marked unrest and huge destruction in the middle-eastern country. The Iraq War began in 2003 when a United States-led coalition sent massive troops there with an aim to dethrone the regime of the then-president Saddam Hussein.

Statement
'We hope the audience will enjoy the surprise and innocence'

Opening up about the trailer, the directors of the movie said, "The two and a half minute film trailer sums up the spirit of the film - a family stuck in war-torn Iraq." "We hope that the audience will enjoy the surprise and the innocence of Chintu and his family will melt your hearts," they added.

Quote
'The present situation is not too different'

"Although the film is set in Iraq in 2004, the present situation, where we are locked down in our houses with our families is no different. We have to live in moment, love each other and keep faith that this too shall pass," they added.

Release
'Chintu Ka Birthday' will release on ZEE5 this month

Chintu ka Birthday was earlier screened at the Jagran Film Festival in 2019. It is now set to start streaming on ZEE5 from June 5. The movie joins a line-up of films that have been given a digital release amid the ongoing lockdown, as theaters remain shuttered due to the coronavirus pandemic. Other such films include Ghoomketu, Gulabo Sitabo, and Shakuntala Devi.