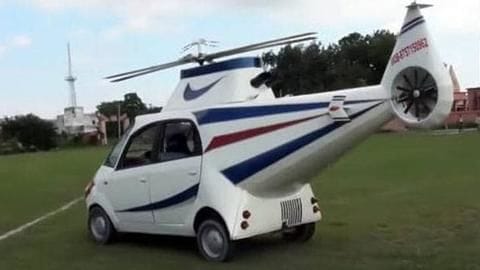 People react to failure in varied ways- while some give up, others fight back. And, a certain man from Bihar chose a quirky way to deal with it, after he failed to become a pilot due to financial constraints. Identified as Mithilesh Prasad from Bihar's Chhapra village, the man modified his Tata Nano to make it look like a helicopter. Here are more details.

To fulfill his dream of becoming a pilot, Prasad converted his Tata Nano car into a helicopter-like vehicle, equipped with a rotor blade, a tail, a tail boom, and a rotor mast. Not just that, he also customized the car's interiors and painted it afresh. But here's the catch- this 'helicopter' cannot fly, it only rolls on the ground, like any other four-wheeler car.

Comment
It is an amusing sight for the villagers, especially kids

Whenever Prasad takes his little 'helicopter' out for a drive on the roads of his village, it naturally becomes an amusing sight for the locals, and especially the kids. "I always dreamed of becoming a pilot, but owing to financial restrictions, it wasn't possible," Prasad explains. "So I decided to buy a car and gave it a helicopter look," he concludes.

Similar event
Similarly, a Chinese farmer once built a replica of Airbus-A320

As it turns out, our desi engineer isn't the only one to have come up with such an idea. Earlier, in a similar event, Zhu Yue, a farmer from China decided to construct his own aeroplane, because he couldn't afford to buy one. The man built a full-scale replica of the Airbus A320, permanently taxied on a short piece of tarmac surrounded by wheat-fields.

In another such incident, a Pakistani popcorn seller attempted an unauthorized take-off of his homemade airplane, after his dream of becoming an Air Force pilot couldn't reach fruition. In March this year, Mohammad Fayaz was stopped by police from performing the said take-off. His plane was confiscated. Courtesy bank loan and some savings, he had spent Rs. 90,000 ($636) to build the plane.