This Mumbai man churns out portraits using a typewriter! 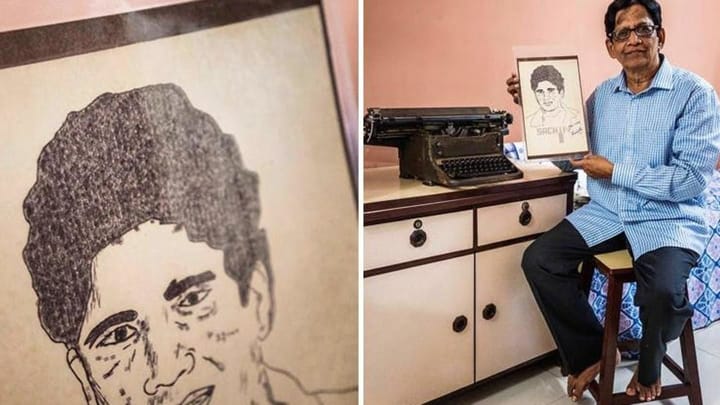 For today's generation, typewriter is probably just a word, but for this Mumbai man, it's his favorite pet. After all, they have been together for almost five decades and he uses it to "draw" portraits. Till date, Chandrakant Bhide has produced some 150 portraits of Dilip Kumar, Amitabh Bachchan, Charlie Chaplin, Sachin Tendulkar, Brian Lara, and even Mickey Mouse, Archie, Laurel and Hardy.

He has exhibited his work in 12 events

Bhide, 72-year-old retired bank clerk, has also held 12 exhibitions of his work, first of which was inaugurated by famous Goan cartoonist Mario De Miranda. He also had his art showcased in festivals like IIT-Bombay's Mood Indigo and IIT-Kanpur's Antaragini. To him, "This is my hobby, my passion," he says, comfortable in his small house above a vibrant chawl in Dadar.

Since late 1960s, the typewriter is his partner-in-art

Bhide discovered his talent in 1967, while being employed with Union Bank. His manager asked him to compile a list of staff intercom numbers. "I typed it in the form of a telephone itself," he recalls. That was the start. Since then, this bulky, manual machine has been his partner-in-art. However, producing an image takes almost 6 hours and one has to be careful.

"One stroke in wrong place and you've to start again"

"It's not like a computer where you can delete. If you put one stroke in the wrong place you have to start again," narrates Bhide, who faced quite an ordeal initially to get his 'strokes' right. That's why he stuck to the "x" key, but when his father prodded him, he started experimenting with keys like "w", dash, asterisk, ampersand and percentage sign.

"It's not possible to make a portrait at a stretch"

Narrating the process, Bhide says, "I use my left hand to hold the paper and my right index finger to type the symbols. For shading his portraits, he uses a light or hard touch on the keys." When his hands start aching, which is every 15 minutes, he takes a break. "It is not possible to make a portrait at a stretch," he says.

His work took him to his idol, RK Laxman

His portraits have also taken him to his idols, Miranda and RK Laxman, famous cartoonist known for his creation The Common Man and for his daily cartoon strip, 'You Said It' in TOI. Recalling his experience meeting Laxman, Bhide said, "He was so thrilled with it that he said the result could not have been better with a pen and brush."

"I have got so many things out of this typewriter"

Though it pains Bhide to realize typewriters are history, he plans to continue. He now wants to 'draw' portraits of Donald Trump, Narendra Modi and Britain's Queen Elizabeth II. "I have got so many things out of this typewriter," he wraps up, thanking the machine.