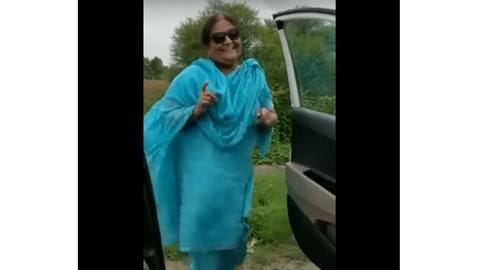 A Kiki dance challenge video of a 55-year-old woman, a Vadodara city resident, has gone viral on social media in Gujarat, even as police in several states have warned people not to perform such acts. Kiki dance challenge involves jumping out of a slowly moving vehicle and dancing by its side to the tune of the song 'In My Feeling' by Canadian rapper Drake.

Video
It was done only to promote road-safety, says her son

In the YouTube video uploaded two days ago by her son, the woman, Rizwana Mir, is seen dancing on the road beside her car while drivers of other vehicles are heard honking. It was widely shared, and also invited criticism. Her son, comedian Ariz Mir, said the video was shot without posing risk to anybody's life and was done only to promote road safety.

Gujarat Police had last Tuesday warned people not to perform the Kiki dance on the roads. A police official said that Cyber Cell was examining the video, but no case has been registered against Mir yet.