Born to a Tamil family in Madurai on August 18, 1959, Sitharaman completed her graduation in Economics from Seethalakshmi Ramaswami College. She moved to the prestigious Jawaharlal Nehru University in Delhi for higher studies. She completed M.Phil in Economics with a special interest in Indo-European trade. It was in JNU that Sitharaman met Dr. Parakala Prabhakar. They got married in 1986.

After marriage, the couple moved to London. There, Sitharaman worked at PricewaterhouseCoopers and had a brief stint with BBC World. They returned to India in 1991. Later, Sitharaman got in touch with BJP veteran Sushma Swaraj. Late PM Atal Bihari Vajpayee gave Sitharaman a post in National Commission for Women, which she held between 2003 and 2005. She formally joined BJP in 2006.

After joining the saffron party, Sitharaman's graph only went up. In 2010, when Nitin Gadkari was the President of BJP, Sitharaman was appointed as a national spokesperson. Before her, BJP had only one woman spokesperson- Sushma Swaraj. In 2014, when PM Modi won elections with a historic mandate, Sitharaman was inducted into cabinet as a junior minister, but she proved she is meant for bigger things.

Sitharaman was appointed as Minister of State (Independent charge) of the Ministry of Commerce and Industry. She was also given the post of MoS in the Ministry of Finance and Corporate Affairs. In 2017, she became India's first full-time woman Defense Minister. Since 2016, she has served as member of Rajya Sabha and secured a seat in the Parliament.

Tenure
Sitharaman shut her critics, and Opposition, with her Rafale speech 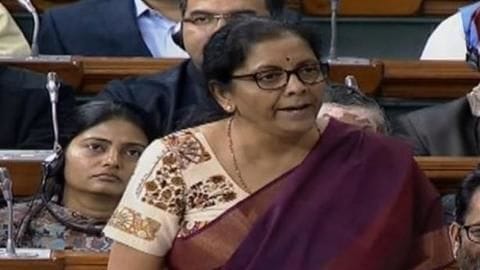 As Defense Minister, Sitharaman handled one hurdle after another. Everyone got piece of her fierceness after she defended Rafale deal in Parliament. For those who don't know, the Opposition claimed PM Modi signed a corrupt deal with France for 36 Rafale jets. Sitharaman was chosen to present facts about the deal, and she gave an impassioned speech for hours, impressing even her critics.

Sitharaman will also be remembered as the Defense Minister who overlooked Balakot airstrikes. To recall, 12 IAF jets had breached Pakistani airspace in February to attack Jaish-e-Mohammed's camp, in response to dastardly Pulwama attack. Many claimed PM Modi gave orders on Balakot on his own without consulting Sitharaman, but she set the record straight. The Defense Minister was kept in the loop all along.

Information
Once, Sitharaman described how she felt after Pulwama and Balakot

In one of her interviews, Sitharaman said she can't describe how hollow she felt when she received the mortal remains of 40 martyrs. She felt the exact opposite on February 26 when she got a call at 4 AM telling her the operation was successful.

Statement
Sitharaman has shown way to millions of girls and women

With her hard work and determination, Sitharaman broke glass ceilings. She took up jobs which were "traditionally" reserved for men. Speaking about her journey, she once said someone from a small town can't reach these heights without some "cosmic grace". Whatever may be the reason, Ma'am, you have emerged as a role model for not only your daughter but millions of girls out there.