On Monday, Congress MP Shashi Tharoor alleged that BJP Yuva Morcha "vandals" had trashed his constituency office at Thiruvananthapuram, and even tied a banner which read "Hindu Pakistan". Tharoor, who wasn't in the office during the incident, has been the focus of much attention since he said that India would turn into 'Hindu Pakistan' if the BJP returned to power in 2019. Here's more.

Going on the offensive, the Thiruvananthapuram district BJP chief, S Suresh, tried justifying the act of vandalism. Labeling the act as "protest" instead of vandalism, Suresh said that Tharoor had invited the ire of people through his "erroneous statement". Suresh added that the incident was "nothing but a natural protest" against Tharoor's inflammatory comments against the saffron party.

Hitting back, Tharoor insinuated that the incident demonstrated that the BJP's answer to critical questions would always be vandalism and violence. Congress leaders too went on the offensive, with senior Congress legislator V.D. Sateeshan telling the media that the vandalizing Tharoor's office was a demonstration of the BJP's arrogance. State Congress President M.M. Hassan and Leader of opposition Ramesh Chennithala strongly condemned the act.

2/2 We have all been warned. The BJP’s answer to the simple question “have you given up the dream of a Hindu Rashtra?” is apparently vandalism violence. That is the face they have shown inThiruvananthapuram today. Most Hindus will say these Sanghi goondas do not represent us. 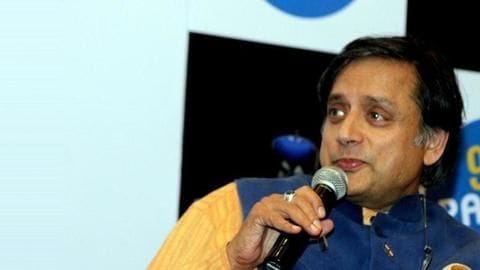 Last week, while delivering a lecture on 'Threats Faced by Indian Democracy and Secularism' in Thiruvananthapuram, Shashi Tharoor had alleged that the BJP would create a 'Hindu Pakistan' if voted back to power in the Lok Sabha elections of 2019. "Our democratic Constitution as we understand it will not survive," said Tharoor, adding that the BJP might write a new one on Hindutva principles.