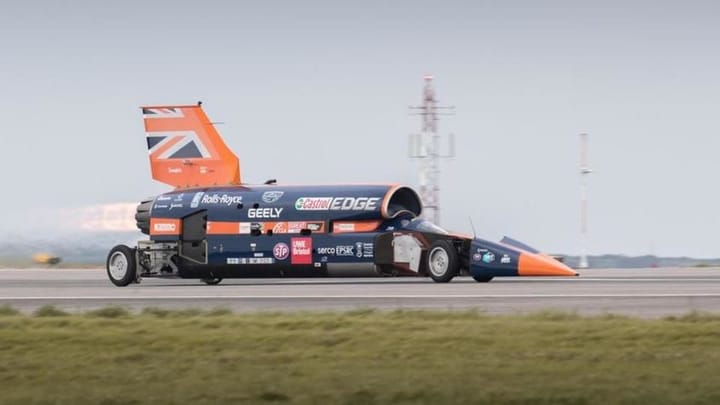 The world's fastest rocket car -Bloodhound SSC (Supersonic Car)- successfully finished its maiden run in England's Cornwall. Nearly 3,500 enthusiastic spectators gathered on a runway at Newquay Airport to see Bloodhound SSC, designed to reach speeds of over 1000mph (1609kmph), in action. Bloodhound aims to break the 763mph land-speed record and achieve 1000mph or above in a South African desert next year. Here's more!

Bloodhound SSC is powered by Rolls Royce EJ200 jet engine, usually seen in Eurofighter Typhoon jets and some rockets. It produces over 135,000 horsepower - six times more than the combined power of all Formula 1 cars on a Grand Prix grid, says The Telegraph. The extraordinary missile-like machine, built from titanium, aluminum, and carbon fiber, is 44-feet long and weighs 7.5 tons.

First run carried out in front of the public

Around 3,500 people reached the Newquay Airport to see Bloodhound SSC "roar to life" in its maiden run on a 2.7km-runway. RAF Wing Commander Andy Green was at the wheel; the test was over in just 30 seconds. The car reached a speed of around 210mph (338kmph) in eight seconds. The airport halted operations for 90 minutes while the test was being carried out.

Green said: "This is a car that's designed to cruise supersonic on a 12-mile track in South Africa. It is not designed to be driven like a drag racing car on a short concrete-track at Cornwall airport. Despite that, the car just delivered in spades."

Bloodhound SSC's Cornwall run was conducted to test its speed performance. Several modifications were made for it to run on a runway instead of desert land. The runway model had rubber tires whereas the desert version will have solid aluminum tires to run at 1,000mph speeds. Its main attempt to break the land-speed record in South Africa has reportedly been delayed by a year.

Bloodhound SSC achieved the 200mph speed target in only 8 seconds; equivalent to 0-60mph (96.5kmph) acceleration in 2 seconds in regular cars. Ford Focus reaches 60mph in 9 seconds; even the $2.5-million-worth Bugatti Chiron needs 2.5 seconds to reach 60mph. However, Bloodhound CEO, Richard Noble, said the trail run wasn't about the numbers but the "fantastic turnout of people," which is very important.

Ayers said their primary objective is not to break a record but "to inspire young people." Adding that they already have the record, he said, "What inspires young people more than high-speed cars!" He also developed the Thrust SSC, which holds the 763mph land-speed record.

Richard Noble said the $85-million Bloodhound supersonic car project was an enormous challenge. He said, "We had no idea of the workload that was actually necessary to get to this stage." He said getting sponsors for the project where "the outcome is not by any means certain, where the finances are shaky, where the technology wasn't even known" wasn't easy.