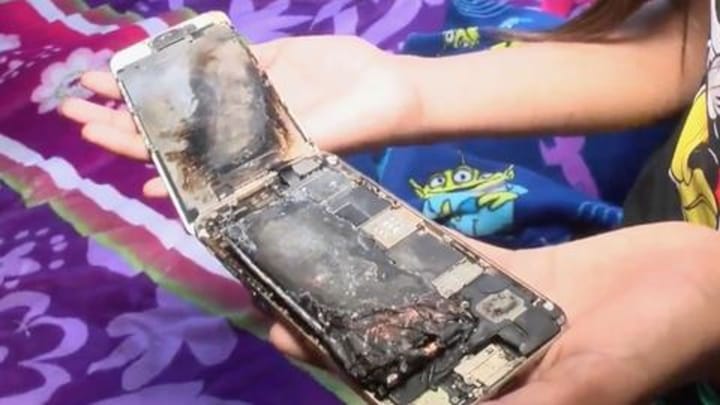 An 11-year-old California-based girl has reported a scary case of iPhone explosion. Kayla Ramos was holding the device, an iPhone 6 unit, in her hand when it started heating and exploded into flames. However, luckily enough, she spotted the fire early and threw the phone away to protect herself from the exploding device. Here's more on the incident.

Explosion occurred when the device was in her hand

Speaking to 23ABC, Ramos claimed that she was holding the device when it started emitting sparks. Panicked by the sudden appearance of sparks, she threw the phone across the bed, following which it caught fire. The burning device didn't injure the teenager but managed to burn holes in her blanket in no time.

Here's how Ramos described the incident

"I was sitting down, and I had my phone in my hand and then I saw sparks flying everywhere and I just threw it on a blanket," Ramos said. "I was right here on the bed and the phone managed to burn through this blanket."

Apple is now investigating the fire

Following the incident, Ramos' mother, Maria Adata, reported the incident to Apple's support team. They requested the pictures of the burnt device and asked Adata to send the unit to one of the company's service center for further inspection. The Cupertino giant hasn't publicly commented on the matter but reports indicate it would be issuing a fresh replacement unit to resolve the case.

But, how did the fire occur in the first place

As the matter still appears under investigation, there is no way to say what exactly caused the device to explode. It is pretty well established that smartphones can catch fire due to overheating or the use of third-party power adapters and charging cable. But, in this particular case, it remains unknown if the charging accessories used were authentic or not.

Notably, the possibility of overheating also remains uncertain as Ramos claimed the device was only used for watching videos on YouTube or playing games sometimes. Such activities hardly make a phone susceptible to explode, which means there might be some issue with the unit itself. The mystery remains unsolved, but chances are, Apple would provide an answer in the near future.