The world's biggest aeroplane, Stratolaunch, will carry rockets into space

In what is possibly the most audacious flying machine ever designed, Microsoft co-founder Paul Allen, on August 20, unveiled Stratolaunch - the world's biggest aeroplane. With a wingspan larger than a football field, two fuselages, and six Boeing 747 engines, Stratolaunch is a behemoth that's designed to carry rockets to the edge of space, but the real question is, "Is it practical?" Here, we decode.

The company
After years of secrecy, Stratolaunch finally offers a sneak peek

Founded in 2011 by Paul Allen, Stratolaunch Systems Corp is a space tech company aiming to establish itself in the satellite launch industry. Having worked in near-total secrecy since its founding, Stratolaunch finally unveiled a timeline for the launch of its colossal plane, as well as four other launch vehicles on August 20. Their pitch? To replace traditional ground-based launches with air-based launches.

In a design that would put Howard Hughes' Spruce Goose to shame, Stratolaunch has two bodies joined by wings that span a whopping 385 feet - larger than a football field. The space plane, designed to make laps between the Earth's surface and the stratosphere, is powered by six Boeing 747 engines, and has a maximum speed and range of 853kmph and 1,853km, respectively.

The worlds largest plane has two fuselages and a wingspan longer than football field. What is its function? Oh, just bringing rockets to the edge of space. Say hello to Stratolaunch: pic.twitter.com/RNuCvv9few

Scheduled tests
Stratolaunch will conduct tests with rockets in 2020, 2022 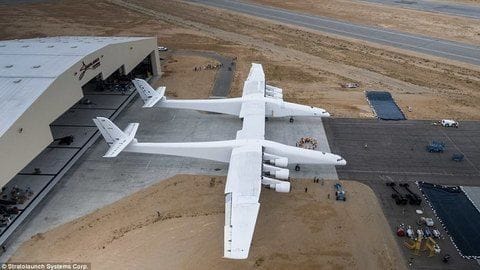 Other designs
Stratolaunch Systems is working on two other launch vehicles

Additionally, Allen said that two other launch vehicles were in the works. He said that a rocket dubbed the Medium Launch Vehicle-Heavy, with a payload capacity of a whopping 6,000kg, was in the stage of early development. Allen also announced that efforts were being taken to design a space plane with medium-class payload or crew-carrying capabilities that would be able to undertake in-orbit flights.

Competition?
Stratolaunch Systems' plans might be foiled by competition

While Stratolaunch Systems seems to have their grand plans in place, the company's ambitions could be foiled by competition. As of now, it's unclear how much a Stratolaunch flight would cost, but it's safe to assume that they won't be cheap. Given this fact, with companies building smaller and smaller satellites, and with ground-based launches becoming cheaper, Stratolaunch could see serious competition.

Data
The math doesn't quite add up

For instance, Quartz notes that a Pegasus rocket launch currently costs $40mn. For that price, small satellite makers could easily afford a ride-sharing option on newer rockets like ISRO's PSLV or SpaceX's re-usable Falcon 9, and even end up saving money.

Additionally, with new satellite makers opting for small satellites, a slew of companies have also started competing to provide simple, cost-effective launch solutions using small, vertical take-off rockets. Rocket Lab, Vector, Virgin Orbit, Firefly, and Relativity Space are some companies among this new crowd of rocket makers. Some have already proven they can launch satellites, and others are awaiting test flights.

When it comes to launching payloads that are beyond the ability of small rockets, Stratolaunch, despite having designed its own launch vehicles for this purpose, is likely to face stiff competition. With SpaceX's re-usable Falcon 9 already dramatically cutting costs, and Blue Origin's re-usable New Glenn rocket expected by 2022, it might prove particularly difficult for Stratolaunch to find a snug fit.