This robot can assemble IKEA chair without any human help 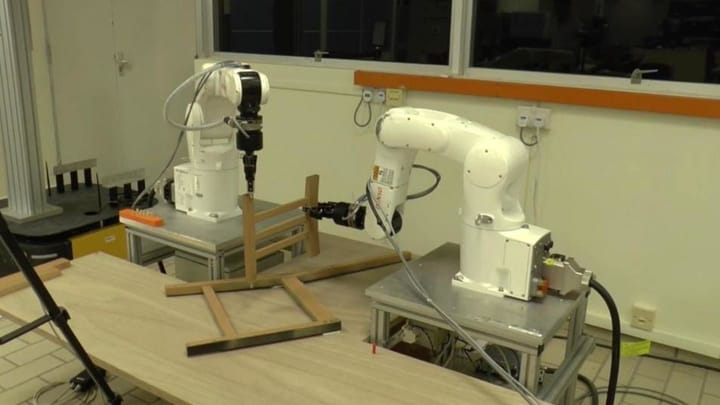 The Control Robotics Intelligence Group (CRI) at the Nanyang Technological University, Singapore, has developed a fully-automated, two-armed robot that can assemble an IKEA chair kit without human help. The machine, through its sensors, programming, arms, parallel grippers, and 3D cameras, could complete the chair's frame in 50 overall steps and 20 minutes. Notably, IKEA furniture kits are infamous for being notoriously hard to assemble.

Robot is coded for specific actions, doesn't use AI techniques

The robot is programmed on computer code to fit pieces of furniture together instead of using AI and ML techniques to assemble parts. It has been trained in specific movements like bimanual pin insertion and twisting the chair around at particular angles. Its arms can sense via tactile feedback. This means it can feel if a peg has successfully been inserted into a hole.

"We were interested in achieving low-level capabilities like perception, planning, and control, rather than high-level reasoning. Low-level capabilities are crucial for the assembly of objects and industrial tasks like handling, drilling, glue dispensing, and inspection," CRI engineer Pham Quang-Cuong said. However, CRI will "integrate AI methods in future work to automate high-level reasoning," and ultimately synthesize physical coding with AI reasoning.

CRI aims to program future robots with a construction sequence for each IKEA catalog entry, and then use AI tech to enable it to determine the construction sequence automatically either from the image of the furniture in the assembly manual or via human voice recognition. Quang-Cuong added the personal construction robot will be ready to sell soon, but only to factories.

Not the first robot to help humans assemble IKEA furniture In 2013, Ross Knepper from the Cornell University, who was then a part of the Massachusetts Institute of Technology, built an AI-based "IkeaBot" that could autonomously assemble IKEA side tables without needing blueprints or specific instructions. The IkeaBot uses a "geometric reasoning system" to first analyze all the available parts and then figure out how they should come together in an organic manner.

CRI's robot can be mass-produced

While the AI-powered IkeaBot seems more impressive, CRI's robot might be more useful. Its parts are uniquely made up of off-the-shelf commercial hardware. This makes the machine mass-producible. Its toolkit includes "two Denso industrial arms, Robotiq parallel grippers, force sensors, and a single depth camera."