Samsung Galaxy Note 8: "Do bigger things" with this phablet! 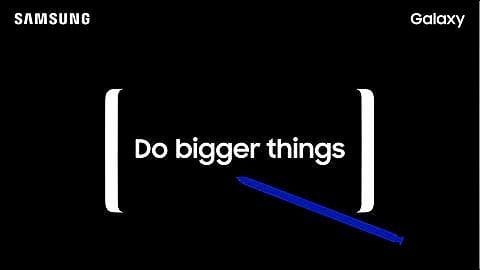 Samsung is finally going to launch the much-awaited phablet of its Galaxy Note series, the Galaxy Note 8, on 23 August in New York. With the launch date approaching, the South Korean electronics giant has released Galaxy Note 8's official teaser 'Do bigger things'. The teaser doesn't reveal any specs but does emphasize the phablet is "bigger" than its predecessors. Find out more!

Teaser
What does the official teaser show?

In the video, Samsung has focused on highlighting the size of the Galaxy Note 8. A Note S-Pen is also seen striking off words like "talk, step, update, follow, impossible, can't, big" to replace them with "act, leap, innovate, lead, possible, can, bigger". Though Samsung hasn't confirmed about the stylus, the teaser suggests it is one of the highlighted features of the device.

The official teaser confirms that Galaxy Note 8 will do bigger things. The hashtag #DoWhatYouCant is also seen at the end, but nothing is revealed about it. It looks like we've got to wait until 23 August to find out what it means.

Note 8
Numerous leaks and rumors about the device specs

Galaxy Note 8 is expected to have a 6.4-inch (some leaks suggest 6.3-inch) Super-AMOLED display. It would come in two processor variants: Qualcomm Snapdragon 835 and Samsung Exynos 8995. It would have 6GB RAM and 64GB internal storage and a 3,300mAh battery. Apart from the traditional black and blue colors, it would be available in a new color 'Deep Blue Sea'.

Alleged images of the Galaxy Note 8 show the device has minimum bezels on the top and bottom and the sides. A horizontal dual 12MP camera setup is seen on the rear panel, where a fingerprint scanner can also be spotted. It would have a USB Type-C port, S-Pen slot, speaker grills, and a 3.5mm audio slot at the bottom.

The Big Size
Is the phablet going to be that big?

The latest leaks suggest Galaxy Note 8 may not actually be as big in size as Samsung wants people to believe. It is expected to sport a 6.4-inch display, which could be the largest ever on a premium smartphone from the house of Samsung. However, the rumored display is only slightly bigger compared to the Galaxy S8 Plus's 6.3-inch display.

Information
Why is Galaxy Note 8 important?

Galaxy Note 8 is quite important for the South Korean company. It needs to get this device right considering the Note 7 fiasco last year. Only a few days after launch, a series of explosion incidents halted the Note 7's production and distribution.