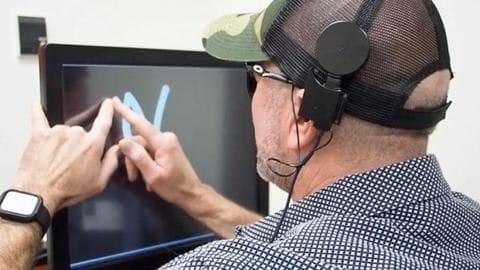 In a major development, a team of scientists has given 'sight' to people who had completely lost their sense of vision. They managed to use electrical stimulation to draw certain shapes and letters on the brains of those people, eventually giving them the ability to perceive and describe those symbols with high accuracy. Here's all you need to know about it.

Device
Brain implant to relay visual information to the brain

According to a study in the journal Cell, scientists from UCLA and Baylor developed a technique to relay visual information from cameras to the brain - by the way of electric signals. But, instead of targeting those pulses at the optic nerve connected to the eye, the researchers used electricity to stimulate electrodes implanted at the visual cortex in the back of the brain.

As the visual cortex is the primary region of the brain that receives, integrates, and processes visual information, the team stimulated it dynamically by relaying different shapes and letters in real-time. The work traced the symbols sequentially on the brains of the patients, giving them the ability "to 'see' the intended letter shapes" and identify them correctly.

Quote
Technique was like tracing a letter on someone's hand

"Rather than trying to build shapes from multiple spots of light, we traced outlines," said study author Michael Beauchamp, a professor at Baylor College of Medicine in Houston. "Our inspiration for this was the idea of tracing a letter in the palm of someone's hand."

Test
Patients were able to perceive with high accuracy

In a test, the system worked almost perfectly for two blind subjects and four sighted people who had the implants as part of a treatment for epilepsy. Specifically, they were given electric stimulation through the implant and were able to perceive the symbols with an incredible accuracy between 80% to 93% all the time. They even managed to draw the symbols on a screen.

Plan
Now, the team plans to upgrade this tech

Given these results, the team plans to upgrade its tech to enable more precise transmission of visual information and help blind people see. "In this study, we stimulated only a small fraction of these neurons with a handful of electrodes," Beauchamp said, adding that "an important next step will be...to develop electrode arrays with thousands of electrodes, allowing us to stimulate more precisely."