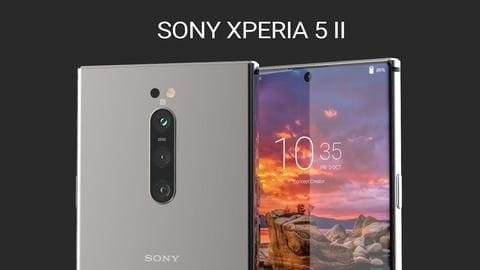 Japanese tech giant Sony will launch its highly-anticipated Xperia 5 II smartphone on September 17. In the latest development, tipster Evan Blass has posted its promo video of the handset, giving away its key specifications. Separately, the Xperia 5 II has been spotted on Geekbench where it scored 900 points in single-core tests and 3,323 points in multi-core performance. Here's our roundup.

Design and display
Sony Xperia 5 II: At a glance

As per earlier leaks, the Sony Xperia 5 II will sport a premium glass-metal body, a conventional rectangular display with prominent bezels, and an IP68-rating. On the rear, it will pack a triple-camera setup. The smartphone should feature a 6.1-inch Full-HD+ (1080x2520 pixels) OLED screen with a 120Hz refresh rate, 240Hz touch-sampling rate, dual front-facing stereo speakers, and a side-mounted fingerprint reader.

Cameras
For the shutterbugs and selfie lovers

The smartphone will have a triple rear camera setup, comprising a 12MP (f/1.7) primary sensor, a 12MP (f/2.2) ultra-wide-angle lens, and another 12MP (f/2.4) telephoto camera with an LED flash. Meanwhile, on the front, there will be a single 8MP selfie snapper. The handset will shoot slow-motion 4K videos at 120fps, and offer burst shooting with autofocus (AF) at up to 20 fps.

The Sony Xperia 5 II will draw power from an octa-core Snapdragon 865 processor, paired with 8GB of RAM and 128GB of storage. The smartphone will run on Android 10 and pack a 4,000mAh battery with fast-charging support. On the connectivity front, the device should offer support for 5G network, dual-band Wi-Fi 6, Bluetooth 5.0, NFC, a 3.5mm headphone jack, and a Type-C port.

Details pertaining to the pricing and availability of the Sony Xperia 5 II in India will be announced at the launch event on September 17. However, looking at the specifications and features, the handset should cost around $1,000 (approximately Rs. 73,500).