Tesla CEO Elon Musk's Boring Company has partially delivered on its promise to shuttle passengers through tunnels underneath the Las Vegas Convention Center (LVCC). Partially, because the original concept involved autonomously moving entire cars on magnetic rails up to speeds of 124mph. The service undergoing testing this week essentially involves Tesla EVs being driven inside a pair of underground tunnels at 40mph.

The company that also managed to sell 20,000 Not-A-Flamethrowers had floated this idea to ease road congestion by linking city hotspots through a series of underground tunnels, where cars could seamlessly be ferried around by an automated magnetic rail system. The pilot project was designed to connect parts of the sprawling LVCC using two 0.8-mile tunnels dubbed as the LVCC Loop. 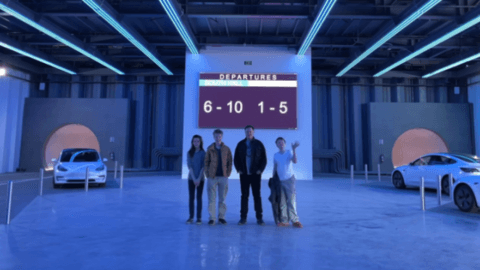 This 0.8-mile tunnel is punctuated by two stations on the surface at either ends and another one 30 feet underground. The pilot implementation only had a few dozen Tesla EVs spanning Model 3 and Y sedans, in addition to Model X SUVs. This week's test run has ditched the app-based ride booking and instead allowed test passengers to catch rides the old-fashioned way.

Several videos and user accounts of the service dotting social media provide a glimpse into how the LVCC Loop works. The lack of app-based hiring and the limited number of cars available during the test meant that passengers had to wait around three to five minutes for what was approximately a 90-second ride. But that nevertheless beats walking 45-minutes across the LVCC.

The current implementation of the LVCC Loop test, however, doesn't represent the final product for which the Las Vegas Convention and Visitors Authority (LVCVA) paid Musk's firm $48.6 million. Eventually, the Boring Company hopes to introduce self-driving cars that can navigate the underground Loop at 150mph. The narrow tunnels currently restrict human drivers to a safe maximum speed of 40mph in the test run.

Intra-city
Meanwhile, Musk has plans to 'tunnel' under the entire city

Through those measures, Musk's LVCC endeavor aims to transport 4,400 passengers through a network of underground tunnels. However, documents obtained by TechCrunch last year reveal that Musk's elaborate system can only manage a maximum of 1,200 passengers per hour. Meanwhile, Musk has larger plans to expand the system across Las Vegas to take that number up to 50,000 passengers per hour.