Meet Centauro, the robot that could help during nuclear catastrophes

Meet Centauro, the robot that could help during nuclear catastrophes
Written by Shubham Sharma
Jan 25, 2019, 12:05 am 2 min read 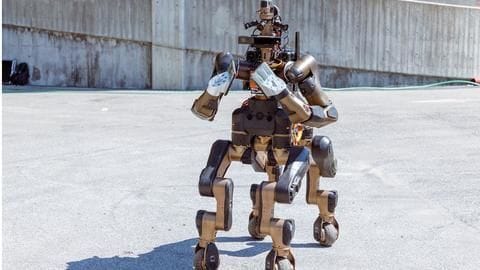 Today, even the smallest possibility of a nuclear emergency seems like a nightmare. It can claim lives on an unprecedented scale and disrupt governments in a very short span of time. But, as it seems, we could soon have a team of rugged robots to manage situations like these, bots that will carry out all the rescue work and save lives. Here's how.

In 2011, robots failed to help in the aftermath of Japan's Fukushima nuclear disaster. But now, researchers in the UK have designed a special robot for the purpose of disaster management - Centauro. It looks pretty weird with four legs and a pair of hands, but could one day help in navigating settings that are dangerous for humans, including those affected by nuclear radiation.

As the name Centauro suggests, the robot looks eerily similar to Centaur, the mythological creature that had the upper body of a human and lower body of a horse. The team claims that unique design of the 5-feet-tall bot helps it stand stable on uneven tracks and at places where bipedal machines start trembling.

Working
But, how this machine works?

Centauro is partially autonomous, meaning it can do certain tasks like navigate to a place on its own. However, for operation in critical situations, it has to be controlled by an operator wearing a telepresence suit and issuing commands from far off. In response, the robots' sensors relay information to the controller, allowing him/her to see things as seen by the bot itself.

Centauro is being advanced for disaster management and nuclear emergencies, but it can already perform a range of tasks. For instance, it can take various postures, navigate in challenging environments, and lift heavy objects with its multi-fingered hands. Notably, in a recent real-world disaster management test, it even climbed stairs, navigated through debris, stepped over gaps, and manipulated doors, valves, and power tools.

Information
However, it still needs to evolve

The researchers working on Centauro claim that the robot has the flexibility to manage disaster situation, but they have emphasized the machine is still not ready to bear the impact of nuclear radiation, something that they plan to change in the coming years.