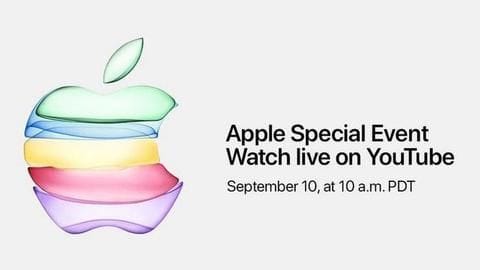 In a bid to build a bigger audience for the launch of next iPhones, Apple has scheduled a live stream on YouTube. Yes, for the first time ever, the Cupertino giant has changed its strategy and is set to stream an event from the Steve Jobs Theater on the Google-owned platform. Here's all you need to know about it.

Apple has long been streaming its events on its own ecosystem of devices or through its own website on chosen platforms. However, this time around, the company has added another place where people could go to- YouTube. The livestream link has already gone live, with a caption saying "Cupertino calling. Join us for an Apple special event live from the Steve Jobs Theater."

Timings
The event will begin at 10:30 pm in India

In California, where the Steve Jobs Theater is located, the event will start on September 10 at 10:00 am PDT, which means that Indians would have to tune in at 10:30 pm at night for the event. To note, you can also set a reminder via Apple's YouTube livestream link to get notified just before the event is about to begin.

Expectations
What to expect from the event?

Meanwhile, going by the leaks and rumors, Apple will launch three new iPhones at this year's event - iPhone 11, iPhone 11 Pro, and iPhone 11 Pro Max - and a new Apple Watch. Also, we could see a new Apple TV as well as learn more about many of the company's planned services, including Apple Arcade and Apple TV+.

Details
iPhones will have the same basic design

The new iPhones will retain the same basic design with a notched OLED/LCD display. But, the back of the phones will have a square-ish camera module hosting dual or triple cameras, depending on the model. Under the hood, the iPhone 11 family will have a faster A13 processor, an all-new taptic engine to replace 3D Touch, improved battery life and Face ID security.