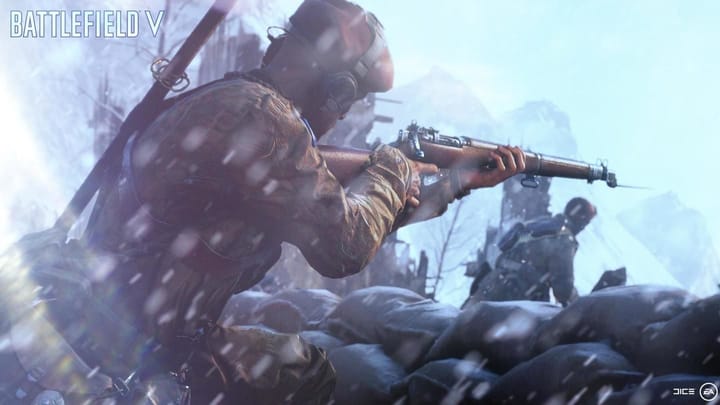 Following the current trends, Battlefield 5 is also introducing a new Battle Royale mode. Notably, this format has become really popular amongst gamers. DICE had teased the concept earlier, but in its latest video titled 'This is Battlefield 5', it gave out a few more details. Even though the information is still scanty, read to find out all we gathered from the video.

There is a storm coming

The 'Battle Royale' mode has officially been named Firestorm. It will put 64 players on the biggest map in Battlefield, according to DICE. Considering that these formats have shrinking maps, this will allow maneuverable gameplay. Notably, DICE has only announced the squad mode for Firestorm. It means there will be 16 four-member squads. As of now, there are no solos or duos in Firestorm.

Raise a little hell of your own

Typical to Battlefield, the map will feature destructible environment and vehicular warfare. This means players will be vulnerable even while camping inside buildings. Vehicular warfare also makes it interesting as drive-by shootings are hard to counter. Interestingly, the main game has fortification building options, like trenches and barricades, which could come handy in Firestorm as players build and shoot from cover.

Bound by wild desire, we fall into rings of fire

Battle Royale maps are always shrinking to restrict gameplay and force players to face-off against each other. While most maps do this using a storm, Battlefield is keeping true to its name. Firestorm will literally have fire rings that close sections of the map. It was first teased by DICE at E3, where it only showed a ring of fire.

Other interesting details about Battlefield 5

Battlefield 5 will release on November 20. The beta is available to early access players from today; others can access it tomorrow. The game will have 8 multiplayer modes and a 5 episode single-player story. Post launch, DLC called 'Tides of War' was also introduced.