How would Federer react to Nadal breaking his Slam record?

Roger Federer is considered the GOAT of tennis, having won record 20 Grand Slam titles. However, his reign is under threat, with Spaniard Rafael Nadal just a title short of matching him. Two more Slams could see Rafa surpass the Swiss. Meanwhile, speaking on his reaction to the possibility, Federer said that he would be fine with it. Here's more.

No worries
Federer all right with Nadal catching him up

Speaking on the topic, Federer said that he, along with Nadal and Novak Djokovic, would be satisfied with their careers, while he wished he could play longer. "We'll see how much more. But, there's still lots to look forward to. In my dreams, I never dreamed this far. I hoped to win just a Wimbledon. If he [Nadal] catches me, it's OK," he said.

"We tried our best as always. It's a lifetime experience playing in front of such an amazing crowd in an amazing stadium. It was a big pleasure for me to be a part of it," added Federer, reports Tennis World USA. 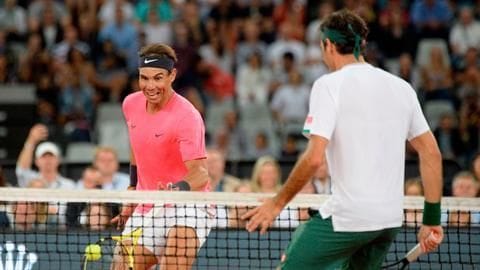 Federer's words come following an exhibition showdown against Nadal in Cape Town, South Africa. While Federer earned a solitary break to claim the first set 6-4, Nadal too struck back in the second set with a break and win it 6-3. The final set once again saw Federer get a break and win the set 6-3, as both enjoyed the friendly atmosphere and bonding.

As for some records held by Nadal: Most titles won at a single Grand Slam: French Open (12) The only man to win three Slams on different surfaces in a year. Highest overall match wins percentage across surfaces: 83.21 Highest overall match wins percentage on clay: 91.79 Has qualified for ATP Finals for 15 consecutive years: 2005-19 Most ATP Masters titles: 35