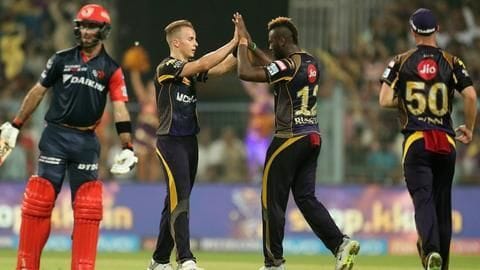 As the IPL 2019 enters the second week, we are set for match number ten between Delhi Capitals and former champions Kolkata Knight Riders at the Feroz Shah Kotla Stadium in Delhi on Saturday. While DC have won one match out of two, it is evident that KKR are off to an explosive winning start. Here's the detailed match preview.

DC were off to a flying start, after they thrashed Mumbai Indians by 37 runs. However, they could not ride on the same luck as they were humbled by defending champions Chennai Super Kings by six wickets. As for KKR, they couldn't have asked for a better start, beating Sunrisers Hyderabad by six wickets and Kings XI Punjab by 28 runs.

Among the players, DC's Shikhar Dhawan would be in the observation frame, after he smashed a 51-run knock in the last game. Further, the focus would be on leg-spinner Amit Mishra, who claimed 2/35 against CSK. As for KKR, Nitish Rana's prolific form is set to continue, following twin half-centuries, along with Andre Russell, who has been unstoppable with the bat.

Head-to-head
KKR have the edge over DC

The Kotla track has always been slow and sluggish in nature, and is expected to be the same once again. Interestingly, DC had posted the total of 231/4 on this track against KXIP in 2011, while the lowest total here is 66, by DC themselves. Judging by both team form and nature of the track, KKR, once again, are favorites to win this tie.

Match details
When, where and how to watch