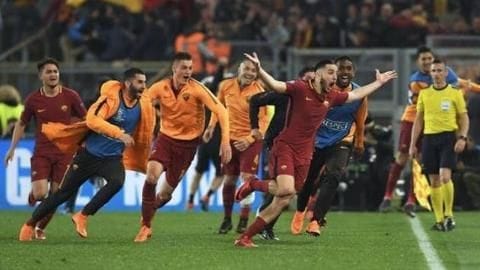 In one of the biggest upsets of 2018, Italian outfit AS Roma stunned the mighty Barcelona in the Champions League, overturning a heavy 4-1 defeat from the first leg to advance to the semi-finals of Europe's elite tournament. Roma boasts an impressive record at home and they beat the Catalans 3-0 at the Stadio Olimpico in the Italian capital. Here's our match report.

Barcelona are the first team in history to both overturn a 3+ goal deficit AND have a 3+ goal lead overturned in the Champions League knockout stages.

Both sides of the records books. pic.twitter.com/cX7Yt3x6jr

The first leg at Camp Nou turned out to be a disaster for Roma as two own goals from De Rossi and Manolas along with Gerard Pique and Luis Suarez's strikes lead Barcelona to a comfortable victory. The only consolation for the Italians was the crucial lone goals scored by Edin Dzeko which had the final say in the fixture.

Roma had slender changes of making it past Barcelona, but the Italians did not give up easily in the second leg. Bosnian striker Edin Dzeko opened the scoring in the sixth minute to send a fully filled stadium into a frenzy.

#ASRoma take an early 1-0 on the night through Edin Dzeko! But #Barça still lead 4-2 on aggregate. Great ball over the top by De Rossi, then Dzeko did well to control and finish. #RomaBarca #DajeRoma #UCL pic.twitter.com/QzS8xdHUP6

But as history has it, De Rossi and Manolas, who were villains with their own goals in the 4-1 loss, reminded fans that not all heroes wear capes. Rossi stepped up to score a penalty, whereas a header by Manolas in the 82nd minute completed the remarkable comeback. Barcelona had no answers, they couldn't decipher what just happened, indeed the night belonged to Roma.

Daniele De Rossi buries the penalty and #ASRoma lead 2-0 on the night! The comeback is fully on now in Rome, #Barça only lead 4-3 on aggregate! #DajeRoma #RomaBarca #UCL pic.twitter.com/B49ElQE1HN

Kostas Manolas!!!! #ASRoma lead 3-0 on the night vs #Barça, and they have the away goals edge at 4-4 on aggregate!!! Great header at the near post off the corner, and what a comeback! #DajeRoma #RomaBarca #UCL pic.twitter.com/AMWDKNOolm

Roma's victory against Barcelona is the joint-second biggest comeback in Champions League history. Impressive Roma has still not conceded a goal at home in this season's Champions League. The Italian outfit is now the fourth side to win two ties on away goals in a season and have now become the 29th team to reach the semi-final of the Champions League.