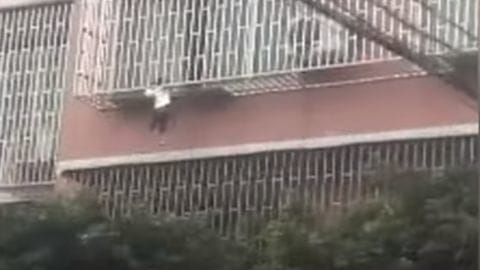 A video is doing the rounds on the Internet showing a little girl hanging from the third floor of a building in China. But that's not the worst part. The spine-chilling part is that she's specifically hanging with her neck trapped in between the balcony railings. Fortunately, two men climbed up to the third floor and saved the girl. Here's what went down.

Details
The girl was reportedly alone at apartment during incident

Last week, in southwest China's Yunlong county, a little girl fell from the balcony of her third floor apartment and her neck got stuck between the railings. The video shows her swaying and dangling from the railings giving a hair-rising sight to the onlookers on the road. According to CGTN, that shared the video on YouTube, the girl was alone in the apartment.

In the video, the distressed girl could be seen trying to get herself out but in vain. Soon, as passers-by got worried, two men used a ladder to reach to the third floor balcony. They quickly climbed up to her and gave support to her body below the neck. They were able to successfully rescue the little girl, she was reportedly unhurt. Thank goodness!

Unfortunately, such terrifying videos have emerged from China in the past as well. Last September 24, a video went viral that showed a 5-year-old boy dangling by the neck on a Ferris wheel in Taizhou Yuhuan Amusement Part, Zhejiang province. When the Ferris wheel reached its highest point, the boy had opened the carriage window, pushed his legs and upper body through it.

However, the boy's head got stuck between the bars and he was hanging at the height of 130-feet above the ground. Thereafter, the wheel operators slowly brought his carriage down and rescued him. He turned out to be fine except for some minor bruises on his neck. His mother reportedly allowed him to ride alone to save 30 yuan (Rs. 316) on her ticket.