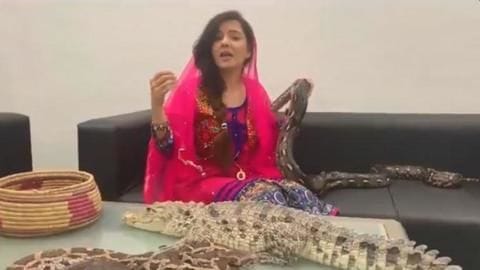 Pakistani pop singer, Rabi Pirzada has landed herself in legal trouble, days after posting a video on social media, wherein she can be seen posing with wild animals, including several snakes and an alligator. In the video that was originally posted on her YouTube channel on September 2, Pirzada goes an a rant against Indian Prime Minister Narendra Modi, and threatens him. Here's more.

Saying that her reptile friends are special gifts for the Indian PM, she criticized the Modi-led government in New Delhi for revoking the special status of Kashmir recently. "See what I have prepared for you. So get ready to die in hell. Okay? And these friends of mine will feast on you," the singer can be seen announcing, in the one-minute-long video.

The said video, that was apparently shot at Pirzada's beauty salon in Lahore, has garnered more than 1,00,000 views on YouTube. Ironically, this popularity backfired for her. It caught the eye of the Punjab Wildlife Protection and Parks Department, and they have now launched an inquiry into the matter. Pirzada will be probed for illegally keeping wild, exotic animals at her disposal.

Charges
Pirzada is now facing up to two years in jail

Importantly, the Pakistan Wildlife Act prohibits keeping such wild species as pets, Wildlife Protection official Sohail Ashraf told The News International. In fact, there are no permits that could be obtained to allow such ownership. He further stated that Pirzada is now facing up to two years in jail. However, the singer believes that it was her anti-Modi tirade that got her into trouble.

Quote
"I have been uploading such videos for last five years"

"I have been uploading such videos with snakes and crocodiles and other reptiles for last five years but the moment I uploaded a video with a message to Indian Prime Minister, the wildlife department jumped into action against me," Pirzada 'angrily' reacted.

Information
Further, the authorities are trying to locate the captured animals

Meanwhile, Pirzada, a native of Pakistan-occupied Kashmir, also staged a rally under 'Save Kashmir' slogan. However, she said that she has no support from the Pakistani authorities. To note, there are many videos of Pirzada playing with snakes on her social media handles. The authorities are now trying to locate the animals, so as to hand them over to the local zoos.

Quote
I love snakes and reptiles right from childhood: Pirzada

"I love snakes and reptiles, right from childhood even though my parents are not in favor of this. They used to try and stop me but I patiently waited until I could afford the hobby myself," Pirzada, daughter of an army officer, said.