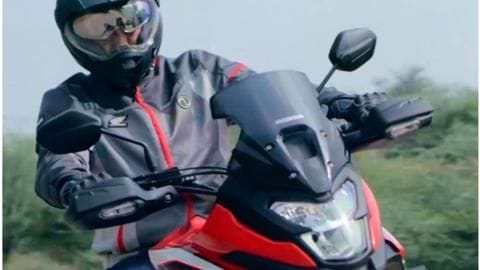 Honda is gearing up to announce a new adventure bike in India on August 19. In the run-up to the launch event, the automaker has released yet another teaser for the Hornet 2.0-based motorcycle, revealing a few more design features. It will come with a tall handlebar, split seats, a raised windscreen, and a 2-piece pillion grab rail. Here are more details.

The Honda adventure bike will likely feature an aggressive look with a muscular fuel tank, a semi-faired design, a split-style seat, a pillion grab rail, and an upswept exhaust. It will also house a tinted windscreen, an LED headlamp, and blacked-out knuckle guards with integrated turn indicators. The two-wheeler is also expected to ride on 17-inch alloy wheels.

Information
Transmission duties will be handled by a 5-speed gearbox

The upcoming Honda bike will be fueled by a 184.4cc, single-cylinder, engine that makes 17.03hp of power and 16.1Nm of torque in the Hornet 2.0. The motor will be linked to a 5-speed manual gearbox.

Safety
Disc brakes will be offered for safety

For the rider's safety, the Honda adventure motorcycle will likely be equipped with disc brakes on both the front and rear wheels, along with single-channel ABS for improved handling on the roads. Suspension duties on the bike should be taken care of by inverted forks on the front side and a mono-shock unit on the rear end.

Information
How much will it cost?

The official pricing and availability details of the Honda Hornet 2.0-based adventure bike will be announced at the time of its launch on August 19. For reference, the Hornet 2.0 starts at Rs. 1.31 lakh (ex-showroom) in India.