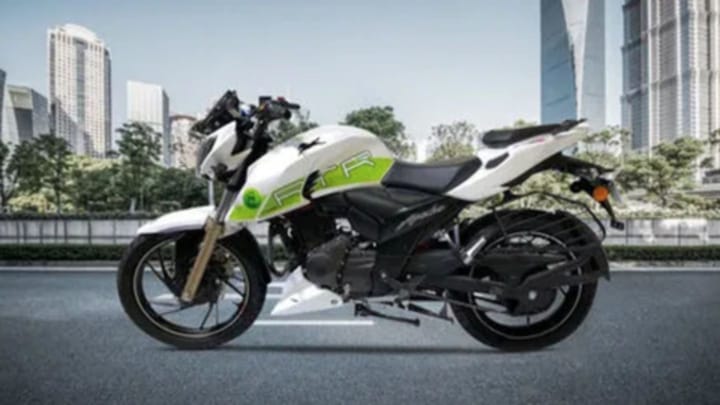 TVS Motor Company has launched the Apache RTR 200 Fi E100 as India's first-ever two-wheeler that can run on Ethanol. Priced at Rs. 1.20 lakh, the motorcycle will be initially available in the states of Maharashtra, Uttar Pradesh, and Karnataka. To recall, the Apache RTR 200 E100 was first showcased at the Auto Expo in February last year. Here's everything you need to know.

The Apache 200 Fi E100 retains the design and features of its petrol-powered sibling. Here, you get a semi-faired sporty body with the engine, alloys, and exhaust pipe in a matte black finish while the body and fuel tank is done in contrasting white. There are also a couple of green decals on the fuel tank that set apart this model from others.

The Ethanol-based Apache 200 is powered by an E100 200cc single-cylinder engine which generates a maximum power of 20.7bhp at 8,500rpm and a peak torque of 18.1Nm at 7,000rpm. It also gets an electronic fuel injection with a twin-spray-twin-port system which ensures faster throttle response as well as a reduction in overall emission levels. The two-wheeler also offers a claimed top speed of 129kmph.

What is Ethanol and what are its benefits?

To note, Ethanol is an oxygenated fuel with upto 35% lesser emission than fossil fuels like petrol and diesel. It is non-toxic, biodegradable, as well as safe to handle, store and transport. Moreover, because Ethanol is manufactured from plant residues such as corn, sugarcane molasses, and sorghum, its local production will also reduce dependence on the import of petroleum while also boosting farmers' income.

Should you switch to Ethanol?

While Ethanol has some clear environmental benefits, its low-calorie value further means you will get a slightly lower fuel efficiency than petrol or diesel. However, considering Petrol costs an average of Rs. 75 per liter and Ethanol will run you around Rs. 53 per liter, you fill more Ethanol and still save in comparison to Petrol costs.