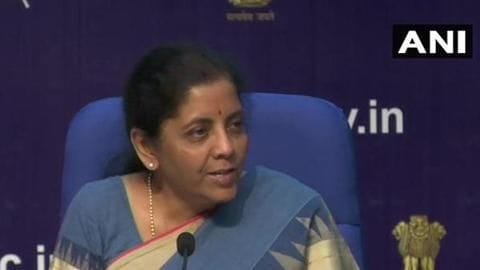 Union Finance Minister Nirmala Sitharaman today addressed the media in the capital, over growing concerns of economic slowdown. During the press conference, the FM assured that the Indian economic growth is more than that of the US and China. She added that reforms are the government's top priority, and measures to revive the economy are being taken. Here are the key takeaways.

"I want to give you a picture of what is happening globally. Global growth is 3.2%, likely to be revised downwards. Many organizations say global demand is very weak," Sitharaman said during the press conference.

CSR violations will no longer be treated as criminal offense

The Finance Minister announced that violations concerning CSR (Corporate Social Responsibility) shall no longer be treated as a criminal offense. Instead, they will be considered a civil liability, from now. The government has provided the companies revised orders and appropriate time for fulfilling their CSR obligations. Further, Ministry of Corporate Affairs shall review the relevant sections under the Companies Act, according to the announcement.

Further, in what would come as a major relief to the FPIs (Foreign Portfolio Investors), Sitharaman announced that the government has withdrawn the enhanced surcharge on foreign investors. Additionally, the Finance Minister said that the government has decided to do away with Angel tax on start-ups and their investors, if they are registered with the DPIIT (Department of Industrial Policy and Promotion).

Sitharaman further said that home and car loan EMIs (Equated Monthly Instalments) will soon become cheaper. This is so because the Reserve Bank of India (RBI) had been cutting down the repo rate (rate at which the Central bank lends money to consumer-banks) every quarter, but the banks were not passing it to borrowers. The banks have now agreed to grant the benefit.

GST refunds due to MSMEs to be paid within 30-days

Subsequently, the FM said that all pending GST refunds due to MSMEs (Micro, Small and Medium Enterprises) shall be paid within 30 days. The request of GST refunds coming from MSMEs henceforth will now be cleared within 60 days of intimation.

Meanwhile, in a move that is aimed at boosting lending and improving the liquidity situation of financial institutions in the public sector, the government is all set to infuse Rs. 70,000 crore into public sector banks. The decision is expected to generate an additional lending and liquidity capability in the financial system to the tune of Rs. 5 lakh crore, the FM said.

Last but not the least, BS-IV vehicles purchased upto March 2020 will remain operational for their entire period of registration, as announced by the FM. Furthermore, both electric vehicles and internal combustion engines shall continue to be registered, she added. However, an additional 15% depreciation will be provided on vehicles acquired from now upto March 2020, taking the total depreciation rate to 30%.

Reforms for the auto sector

BS IV vehicles purchased till March, 2020 shall be valid for period of registration
The higher registration fees deferred till June 2020
Depreciation increased to 30% - additional 15% depreciation on all vehicles acquired till March 31, 2020 pic.twitter.com/u2sXZKbtgk