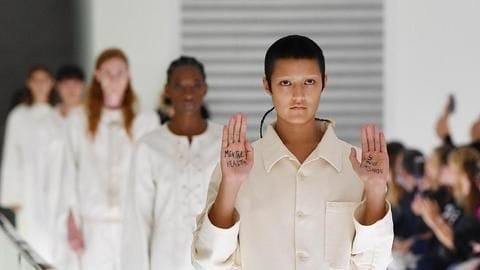 On Sunday, Gucci debuted its spring/summer 2020 collection during the Milan Fashion Week. The 89-look collection, designed by Alessandro Michele, was showcased by motionless models dressed in straitjacket-inspired white garments being propelled on a conveyor belt. Among the models was 26-year-old Ayesha Tan-Jones, who staged their own protest against the collection for being offensive to mental health patients. Here's what went down.

While being propelled along the runway/conveyer belt, Tan-Jones held up their hands to show the slightly-smudged message: "Mental Health is not Fashion." Tan-Jones shared a video of their protest on Instagram along with a statement which slammed Gucci for using mental health for a "fleeting fashion moment." Tan-Jones said that Gucci's outfits "alluding to mental patients" were in "bad taste."

Tan-Jones, a non-binary artist and musician, said, "Worldwide 1 in 4 people suffer from mental health issues and LGBTQIA+ individuals are 3 times more likely to experience a mental health condition." They also talked about their own and their family's struggles with mental health.

Further, Tan-Jones stated, "Straight jackets (sic) are a symbol of a cruel time in medicine when mental illness wasn't understood, and people's lives and liberties were taken away from them, while they were abused and tortured in the institution." They added, "Presenting these struggles as props for selling clothes in today's capitalist climate is vulgar, unimaginative, offensive to millions of people around the world."

Speaking to BuzzFeed News, Tan-Jones said that they received immense support from other models without which "I would not have had the courage to walk out and peacefully protest." They also vowed to donate their entire fee from the show to mental health charities.

Gucci's statement
These clothes will not be sold, said Gucci

However, Gucci defended the collection as the "blank-styled clothes" were the designer's own protest against how "through fashion, power is exercised over life, to eliminate self-expression." After the straitjacket-inspired looks were paraded, the lights went out momentarily, and the designer presented the "antidote" as 89 models now strutted along the runway donning the vibrant spring/summer collection. Gucci said the white clothing wouldn't be sold.

Uniforms, utilitarian clothes, normative dress, including straitjackets, were included in the #GucciSS20 fashion show as the most extreme version of a uniform dictated by society and those who control it. These clothes were a statement for the fashion show and will not be sold. @alessandro_michele designed these blank-styled clothes to represent how through fashion, power is exercised over life, to eliminate self-expression. This power prescribes social norms, classifying and curbing identity. The Creative Director’s antidote is seen in the Gucci Spring Summer 2020 lineup of 89 looks, he has designed a collection that conveys fashion as a way to allow people to walk through fields of possibilities, cultivate beauty, make diversity sacrosanct and celebrate the self in expression and identity. #AlessandroMichele

Meanwhile, the designer in question said at a press-conference, "A uniform is something that blocks and constrains you- that makes you anonymous. That makes you follow the direction of travel" adding that the straitjacket was "the highest type of uniform." However, Gucci told The New York Times that since the show's theme was freedom, it's only fitting that the model should be free to protest.