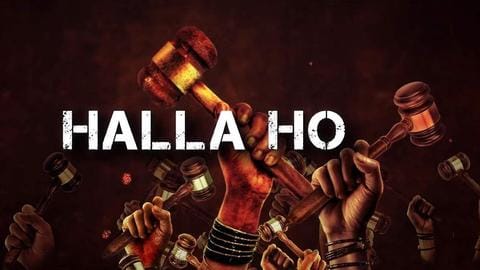 The impactful trailer of Sarthak Dasgupta's 200 Halla Ho is here. Starring Amol Palekar, Barun Sobti, Rinku Rajguru, Sahil Khattar, Saloni Batra, and Indraneil Sengupta, the ZEE5 movie is based on a real-life story of 200 Dalit women who had attacked a serial rapist in an open court. The trailer aptly depicts the double oppression faced by Dalit women in our country. A breakdown.

The short two-minute-long clip opens with several Dalit women from one locality being locked up for a crime, as per some, they did not commit. Then we realize these women are being accused of lynching a gangster/robber/serial rapist Balli Chaudhary (Khattar) in open court. While Rajguru speaks against the arrest, Sobti plays a lawyer who represents the women. Palekar is a retired HC judge.

Issues
The serious topic is dealt with sincerity

The serious topic is dealt with sincerity and even the crisp trailer manages to highlight certain points. When asked what were the charges against the gangster, a police officer nonchalantly says, "Petty molestation and rape cases. Just time-pass." This shows the triviality with which crimes against women are seen, unless, of course, the brutality is Page-1 newsworthy or it trends on social media.

Quote
Director wishes to contribute to social equality through the film

Watching Palekar on the screen after so long is indeed refreshing. Dasgupta, known for The Great Indian Butterfly, has also written the ZEE5 Original Film. He said, "This isn't a film for me, but a shoulder that I give to (a) movement toward social equality. I need to convey to the audience that women should be treated equally and that Dalits' lives matter too!"

Information
When is taking law in your hands justified?

Dasgupta added that his film will address the "debate" whether the women were "right" or "wrong" in taking the law in their own hands to finish a person who repeatedly "molested, tortured and mortified" them, but escaped punishment through legal loopholes. Produced by Yoodlee Films, 200 Halla Ho will drop on August 20. It will be available in both Hindi and Marathi.