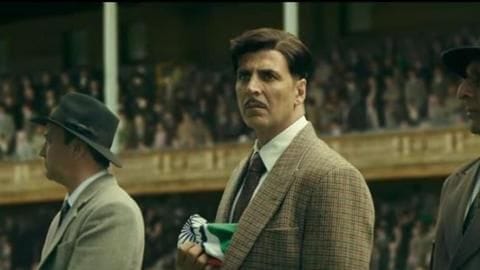 The highly-anticipated trailer of Akshay Kumar's latest offering 'Gold' has just been released and it was worth the wait. Featuring Akshay as the leader of Indian Hockey players, the sports drama traces his journey of winning free India its first gold medal. Also seen in the trailer are Mouni Roy, Kunal Kapoor, Amit Sadh and Vineet Kumar Singh.

Details
'Gold' is inspired by true events, but isn't a biopic

There was this notion about the film that it is based on the life of Tapan Das but producer Riteish Sidhwani recently cleared the air regarding the same. He stated that the film is a completely fictional story but it is set against a real backdrop between 1933-48 India. "It is not a biopic. It is not based on any character," he said.

Context
The film can very well be Akshay's biggest hit

Trade experts believe that after the underwhelming box office performance of 'PadMan', Akshay will bounce back strongly with the sports drama as it has all the trappings of emerging a money-spinner. The film has every chance of crossing the lifetime collection of Akshay's biggest hit to date - 'Toilet - Ek Prem Katha'.

Information
'Gold' will be out on Independence Day

Directed by Reema Kagti, the film is slated to release on August 15. It will be clashing with John Abraham's 'Satyameva Jayate' and Dharmendra's 'Yamla Pagla Deewana Phir Se'.