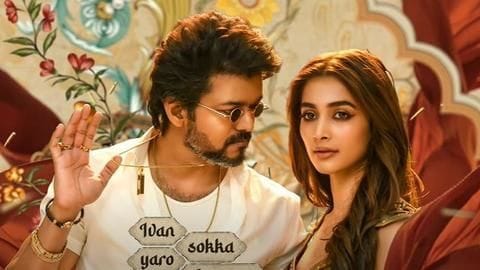 Makers of Vijay and Pooja Hegde's upcoming actioner Beast have released the film's first single. Titled Arabic Kuthu, the song has been composed by Anirudh Ravichander. He has also crooned the number, along with Jonita Gandhi. High on energy, the number compels you to listen to it till the end. In that light, we list five key takeaways from the sensational track.

#1
Not a hero introduction number, but a duet song

To his die-hard fans, Vijay is Thalapathy (commander/leader). So when a film has him in the lead, the first song is expected to be focused on the aura of his character. But, Arabic Kuthu is not a hero introduction number. It is instead a duet, and hence features Hegde, too, and pretty prominently. Launching a romantic song on Valentine's Day always works. Good move!

#2
Non-Tamil words used, as seen in Vijay-led songs, but less

Sivakarthikeyan's words are a big positive for the song. Usage of several non-Tamil words throughout the number ups its peppy flavor. Arabic Kuthu starts with words like Malama Pithadhe, and we do not know if these are actual words or made-up, but this clicks. One observation: The made-up words are much lesser here compared to Vijay's older song Simtaangaran. Another welcome move!

Next, the spectacular visuals. Since this is a lyrical video, we do not see the video's entire content, but at the 1:11-minute-mark, a grand golden set welcomes us, leaving us awe-struck. The extravagant sets, which look like an inside of a palace, are wonderfully complemented by the costumes of the lead actors, complex choreography, and the background dancers. Special mention: Their belly dancing moves.

The 4:42-minute-long song sounds like a typical Ravichander-composition but is still pretty enjoyable. It has fast beats and as soon as it starts, it grows on you. As was advertised by the Beast team, the music is indeed a mix of Arabic and western styles. Though we have had Arabic-style songs in the past such as Meherezylaa from Maanaadu, Arabic Kuthu feels fresh.

Usually, when songs are released from upcoming films, we tend to look for hints on what the film's story would be. Arabic Kuthu, however, offers no such thing. We can only assume that the track would be placed somewhere in the middle of the film, and nothing more than that. But, Vijay's chiseled body proves that Beast will be high on action.