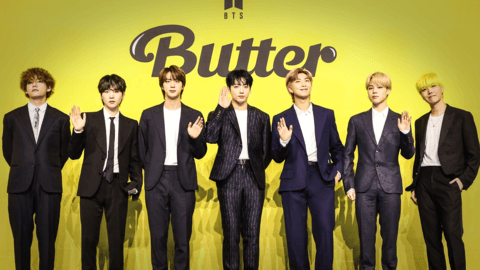 South Korean boy band BTS released their new English single Butter on May 21, and it has already broken many records. Just like the name suggests, their latest song is deliciously smooth, and it is already a top contender for the most-loved song of the year. The BTS ARMY really got around the music video and completely obliterated YouTube records.

BTS previously set the 24-hour debut record with Dynamite in 2020. Over 101 million people had viewed the music video on its first day. With their new song, Butter, they have now broken their own first-day view count record. The Butter music video was watched by over 112 million people on YouTube in 24 hours and currently has over 137 million views.

BTS ARMY made sure that the special live countdown for the premiere of Butter was also record-breaking. There were over 3.9 million people waiting to watch the premiere on YouTube. The South Korean band now holds the number one and number two spots for the biggest YouTube Premieres to date with Butter and Dynamite (three million views). Looks like there's no stopping them.

BTS has indeed become a global phenomenon in the past few years. They currently have six American Music Awards and five Billboard Music Awards under their belt. In 2019, Time magazine named them in their 100 most influential people in the world list. They were named IFPI Global Recording Artist of the Year in 2020, the first and only Asian and non-English speaking act.